Budgeting and saving tips men can learn from women

It’s common to bump into men in pubs, whining about their wives. “She is a possessive nag,” one would complain. “She can’t let me drink as much as I would love to,” another one would complain. “Her people, who eat like termites, have pitched tent in my house,” the rants would go on and on.

But try and suggest to them the option of divorcing such ‘bad’ wives. Your suggestion will be dismissed offhand.

Reason? However much a man earns, in the absence of the woman of the house (bad as some come), most family budgets would be blown in days, with the operations of the households grinding to a halt.

Even with their fat salaries, a good number of men would run out of cash, way before mid-month, were it not for the frugal ‘ministers of finance’ in their lives, who happens to be their girlfriends or wives.

Actually, a good number of men have clung onto their so-called ‘bad wives’ for one reason: Their cutting-edge budgeting and expenditure oversight skills.

It’s an open secret that most family budgets are managed by wives.

“When it comes to stretching resources, women beat men hands down,” says Derik Okumu, a resident of Umoja Estate, a middle class neighbourhood in Nairobi, who still finds a meal on the dinner table, even on days he only leaves his wife Sh100.

Sh100 worth of supper feast for the family

Okumu still can’t wrap his mind around the fact that his wife can budget and make a meal out of Sh100.

“Things she does with a hundred bob, even the Finance Cabinet Secretary could never pull off with Sh1 billion! My kids feed like crazy and without that woman with her budgeting genius, I would have endless riots in my house,” says Okumu, as he heaps praise on his wife and her budgeting skills.

Just how do women hack it? Many men wonder. With only Sh2,000 in his wallet, the average Kenyan man considers himself dead broke. Thus, to calm his nerves and drown his sorrows, he strolls into his local pub for a fix.

Of course, after two or three bottles, his sorrows ease and he feels sufficiently philanthropic enough to buy a drink, or two, for a woman of loose virtue, hovering around.

This, from a man who has never tipped the house help who wipes his children’s bottoms, or the barber who pampers his balding head every weekend.

Then he eats meat, just a few pieces, to fortify his stomach against the brew in case it is laced with methanol, which is often the case nowadays. When he leaves the pub, he will be on his last Sh60. That is, if he is lucky.

Meanwhile, his wife, with only Sh230 in her purse, meanwhile, went straight home, invested in a bundle of sukuma wiki and fell asleep with Sh200 in her purse. No prizes for guessing who gives the broke bugger Sh100 for bus fare the next morning.

Look, a woman with a good job will buy a pure cotton mutumba undergarment for Sh60 that has been tried and tested overseas for three years by a woman who could be dead for all you know. But a jobless man, because he wants to pretend that he has cash, will walk into a supermarket and buy some Chinese nylon rag for Sh400. Guess who will be walking around with holes punctured in his undies in three weeks!

This saving wisdom, at least in Africa, is manifested best by men who own cattle and scornfully relegate ‘useless’ chicken to women. Yet when dowry payments are due, or when death befalls the family, the man watches in agony his prized livestock being carted off or slaughtered while the wise woman keeps feeding her clucking chicken.

In sum, when you are a man, and you are dismissing a sex worker as nothing but a useless harlot, remember she makes more money in two minutes than the average muscled bouncer or handcart pusher makes in one whole sweaty day! 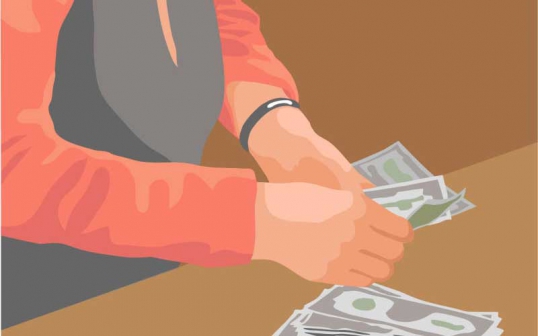 Let’s face it, women budget way better men and there are many lessons on money and budgeting men can learn from the so-called weaker sex.

“Besides being economically disenfranchised, women have adopted support mechanism they fall back to when in financial crisis. Think chama (women investment groups). Today, there are men who brag in pubs that they have too much testosterone flowing in them that they can’t form or join ‘sissy arrangements’ like chama, yet when financial crises come calling, it’s their wives who come through, of course, courtesy of chama money,” laughs Jackson Mwanzia, who confesses that his wife is better at money management than him.

If people were to be honest, you will find out that more married women have higher net worth than their husbands. Oh yes, a good number of women have bigger balances in their bank accounts after payday than their men. Doubting? Just have a quiet word with any banker.

“Our personality traits as women helps us budget better than our male counterparts. Unlike most of our male counterparts who only think about today, the average woman is always worried about not just tomorrow but the future,” Kendi, a mother who confesses of having a secret bank account.

Talking to different women to tip men on their budgeting and money management secrets, some explanations stood out. According to Victoria Andati, for instance, women, despite their penchant for shopping, always plan.

“Most men don’t write down budgets. They, contrary to general perception, are impulsive in their buying. It’s such unplanned for purchases, especially big ones, that kill a budget,” says Victoria, adding that women, contrary to popular belief, tend to be more disciplined when it comes to spending cash, saving and budgeting.

Some of the women we talked to pointed to the fact that they are more conservative when it comes to money matters and avoid risky ventures, something they accuse men of being fond of.

“When you talk to social security funds administrators such as NSSF, they will tell you women’s retirement savings account balances tend to be higher than men’s. Or even a chat with bankers will reveal women’s cash flow tends to be better than their husbands,” says Alice Wanguku, a banker.

She goes on to add: “The reason for this is that men tend to take more risks and are in the habit of investing for the short term. We, by nature, tend to be more conservative and think future more than our male counterparts.”

“It’s not rocket science. Women are always out there seeking help on financial matters, investments and the likes. Thus, have a relatively better understanding of money dynamics. Men, on the other hand, approach money with a know-it-all attitude,” says Rukia.

She goes on to say that when in need of help in, say, paying off a debt, budgeting or controlling their expenses or saving plans, men, however clueless, always insist on doing it by themselves. They are men, after all. Why risk coming off as weak by asking simple questions and seeking advice?

“On average, men accumulate more debts than women. Even on unnecessary stuff like weddings, gifts or even when pleasing women with exorbitant treats.

“I also know of men who take loans to pay off smaller loans. But when faced with tricky situations they can’t handle, women always seek advice. They always google or even call FM radios, seeking for advice from trusted radio hosts or just anyone they suspect understands money matters,” says Rukia.

It’s a high time men sat down with their women or, seeing as their fat egos may not allow that, at least keenly study their girlfriends or wives behaviour with money.

Gentlemen, you will be amazed at how tracking expenses, saving on regular basis, budgeting and setting financial goals will help you manage your bank balances.