I am curious, when will my husband catch my ‘STDs’?

By Angela Kintu | 4 years ago 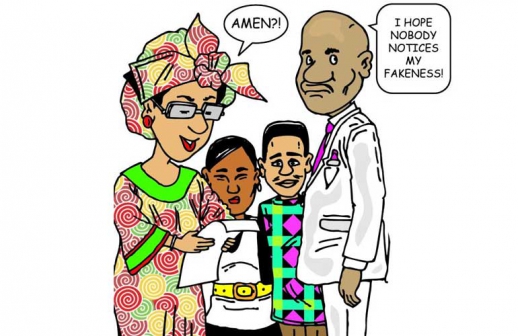 As you drive through your cities, admiring billboards whenever the traffic gets held up, you will occasionally see one advertising a church-related event: A crusade, concert or just the church itself.

Nine times out of ten, the billboard will feature the smiling faces of the ‘man of God’ and his picture-perfect wife. They will not be named as Pastor Bob and Mrs Bob. No, most likely they will be both be named as pastors – even the woman.

I like things to be old school, therefore the idea of a pastor’s wife as just that – a pastor’s wife – appeals to me. Thus, I like the arrangement of Bishop T D Jakes and his First Lady Serita.

He has his roles and she has hers. They are not competing or duplicating work, and it appears (in public at least) that she is there to support him in his calling.

This business of Pastor John and Pastor Jane Doe doesn’t sit right with me. It is as if pastorship suddenly became an ‘acceptable STD’. Does the inspiration of the Holy Spirit move through the pillow by osmosis?

There was an infamous case of a Kampala housegirl-turned-’prophetess’, who set her sights on an already married businessman father of two. The flamboyant prophetess was rolling in the latest bright yellow Hummer, so it wasn’t long before the man decided to take a ride with her.

One huge wedding (and no children) later, the man is also now a pastor! So they are referred to as Prophetess and Pastor.

If the two of you met and courted in Bible college as you were both training to be pastors, then go right ahead. But if the prophetess found you operating your duka and then tomorrow you are suddenly both pastors, then forgive me if I smell a big rat.

Doctors train for long years perfecting their craft. Five years is the basic minimum, which could be followed by many more in order to become a specialist. Now, doctors are training to work on the human body which has a finite lifespan of approximately 80 years.

And then they are unable to cure old age or death. Pastors, on the other hand, are preparing us for eternity. That is a loooong long time. How can they just land in the pastorship minus any training simply because they share a bed with another ‘anointed’ person?

I have longed to be a manager! I want people to scatter like cockroaches when they hear my high heels clicking down the corridor. I want my designated parking space and a personal assistant to answer the phone and inform people that the boss is out to lunch.

I would really love to be the manager of anything. But years of bending it like Beckham with baba watoto has not supplied me with any titles. Except, perhaps, the default one of domestic manager!

On the flipside, he also hasn’t caught any of my ‘STDs’ either. He does not do meal plans, multitask, gossip endlessly on What’sApp or plait our daughter’s hair for school each evening.

I have failed to get him to even understand the importance of window shopping in different places to compare prices.

So why do these pastors get to osmote their things? And which anointed one can show me how to do it?