By John Njenga | 4 years ago 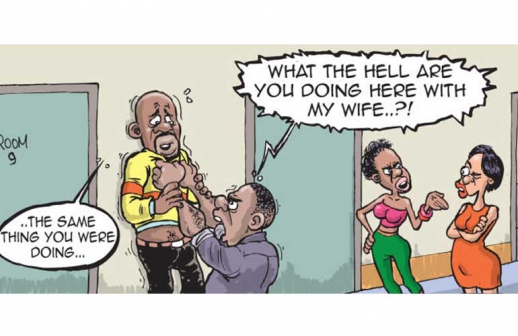 Whoever coined the phrase dawa ya moto ni moto (the remedy for fire is fire) might have had in mind a Mombasa couple who stumbled upon each other at a lodging last Saturday, each with a secret lover in tow.

Drama immediately erupted, with the unidentified husband engaging in a fierce fight with the man his wife was with. It took the intervention of staffers at the lodging who separated and kicked them out of the premise for unbecoming behaviour.

During the incident that took place in the afternoon, the man, who was accompanied by a 'bootylicious' waiter from his local pub in Mikindani estate, went bonkers when he encountered his wife of many years with a young looking man.

Jackson Wachira, an electrician who was doing repair work at the lodging when the incident occurred, said the man forgot that he, too, had betrayed his wife’s trust by sleeping around with a barmaid and rushed to attack her and her secret lover.

“He rained blows on the woman and her lover but fortunately there were people around, including the restaurant staff and customers, who separated them. However, things took a different turn when the two women also went for each other’s neck when the husband proceeded to attack the young man,” narrates Wachira.

According to the electrician, the crowd let the two pairs square it out for a few minutes before once again separating them, but not before they had inflicted various injuries and thrown nasty barbs at each other.

“The wife was telling the bar maid she was too ugly, lacked shape and old for her husband. This infuriated the bar maid who attempted to continue with the wrestling match but was prevented by the crowd,” says Wachira.

But the barmaid, Wachira says, also threw nasty words on the woman, telling her that, while seducing her, the woman’s husband had confided in her that he was looking for a mpango wa kando since his wife was not 'sweet' anymore.

To try and bring the matter to an end the crowd told the young man and the bar-maid to leave together and leave the husband and wife to sort out their issues.