Mombasa gay hookers who ‘eat life with a big spoon’

By John Njenga | 4 years ago

Steve Kamangu was walking along Digo Road in Mombasa town around 11pm two weeks ago when he was stopped by a light skinned ‘woman’ across the road dressed in a buibui. Out of curiosity, he stopped and the all-smiles ‘woman’ crossed the road to join him.

A few seconds later Kamangu was reeling in shock. The ‘woman’ turned out to be a male sex worker who had spotted a potential customer in him.

“What immediately hit me was ‘her’ face. It was clear that a beard had only been freshly shaven. After that it was the popping Adam’s apple and the male baritone voice.

I was totally out of my wits and had nothing to say even after ‘she’ plainly told me what ‘she’ wanted and how much it would cost. I was almost hit by an incoming vehicle as I hurriedly crossed the road to board a Matatu for home,” he told the Crazy Monday.

What Kamangu encountered, however, is nothing strange or new for those who live and regularly operate within Mombasa Central Business District late at night. They are used to encountering bold gay men who openly solicit for sex for money with whoever they come across on the streets, just like regular female prostitutes.

And the fact that their numbers has almost doubled over the past one year is testament that they are in good business in spite of the anti-gay rhetoric you hear being spewed by religious and community leaders in Mombasa.

When this writer recently took a tour of the CBD at night, there were hundreds of gay men dressed in women attire, roaming the streets and seemingly competing with their female counterparts.

One of the men who only identified himself as Husna disclosed that he has been working as a male sex worker for the last three years after being lured to streets by the harsh economic times being experienced in the country.

“I have been gay since I was in high school. However, when I graduated from a fashion and design college and failed to get a job, I thought of other means of survival. I occasionally patronized a local gay pub where men really sought me because of my feminine looks.

I had one partner then but he was jobless too. I decided to capitalise on this demand and soon, I had multiple partners who were giving me financial favours,” he narrates.

Husna, who later revealed his real name as Omar, says it only took him a few months to hook up with networks of fellow male sex workers all who have assumed female names and don women outfits — and there he got convinced to get out openly in the streets to do business when business is dry in pubs and bars.

He explains that that way he is able to fetch a good sum. Unlike being tied to one partner who wants to hold on to you, occupying most of your time.

“Sometimes, I and my colleagues can sleep with at least ten men per night and unlike our female counterparts we always show up on the streets because we are not troubled by menses. Our charges are also higher than what the women charge,” he told Crazy Monday.

He says the only challenge so far has been police officers who harass them, demanding bribes and even sexual favours. “There are many police officers out there who are gay and solicit sex from us and we know them. We cooperate with some of them, since we do not want to be driven out of the streets.” Police sources in Mombasa, however, refused to be drawn into this topic, saying those who say they have been sexually assaulted should have reported the same.

During the interview with Husna, several of his colleagues, some dressed in skimpy female garments, red lipsticks and all kept joining in the conversation, saying that it was high time the government legalized same sex relationships and marriage.

“Some of our customers are high ranking Kenyans, senior politicians and even religious leaders. Kenyans should drop this hypocrisy and legalise both prostitution and homosexuality,” three of them kept chorusing.

“Some of the top politicians and public figures readily part with Sh50,000 for a session lasting less than three hours. They, however, ask us to be discreet and since we want them to come back again, we comply,” Husna confides.

But if the gay men seem to be doing great, their female counterparts are suffering silently and pray day and night that their men colleagues are kicked out of the streets.

“It pains us so much when men ignore us and sleep with their fellow men. There are many men who are secretly gay and never hesitate to go with such guys. We are too many and the men coming after us are few yet it is rare to see our male counterparts lacking customers.

Some get many clients, we suspect they use charms,” Betty Kadzo, a sex worker who has been in the streets of Mombasa since 1998 when she came to the Coastal city from her native home in Malindi, says.

According to her, the number of gay prostitutes has been drastically increased. “It is depressing to see men who pretend to be saints who bash gays during the day seek them out at night leaving us out. Strangely, married men lead in this category,” she avers. 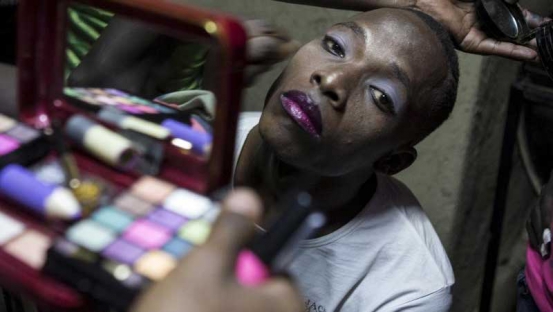 But although Husna’s story paints a rosy picture of their trade, his colleague Kate also known as Njoroge gives a different story.

“We are here because we want to survive. Full stop. Some of our customers refuse to use protection while others short-change us after being served. Still, nothing hurts like being worked on by a giant of a man with an enormous organ. Some of us nurse injuries for days, yet some of these men are only willing to part with peanuts,” he says.

Majority of those who spoke to Crazy Monday believe they were born gay as they were never attracted to women, even when they were teenagers. They, however, say they would rather sleep with partners they love rather than cold strangers they meet on the streets.

They only do this out of necessity. At the same time, some Muslim religious leaders have been encouraging youth to round up gay sex workers out and beat them. “We operate in fear even as our numbers keep on swelling.”

His sentiments were echoed by Taib Abdulrahman of the Mombasa based Reach-Out Center Trust, an organisation that rehabilitates drugs addicts. He says some of those who resort to drugs are gay men, out to vent out the frustrations they get on the streets.

“We have rehabilitated several men who have sex with men (MSMs) and the tales they give will shock you. Some are not in the streets out of choice and that is why they end up using drugs to drown their sorrows,” he notes.

Taib says his organization has been partnering with other institutions like the Kilifi-based Kenya Medical Research Institute Wellcome Trust to help MSM drug addicts out of the streets. A recent report released by the research centre showed that surprisingly some of these male prostitutes are in heterosexual relationships and therefore put the lives of their female partners at risk.

“Some come here with sexual transmitted diseases some in advanced levels because they fear going to hospitals due to the stigma of their work. It is not so rosy out there as some might purport,” he explains.

According to statistics from the National Aids Control Council about 2,853 people living with HIV/Aids in Mombasa County die annually. Taib, however, says that HIV prevalence is high among women as compared to men, adding that the male sex workers are very vulnerable to infection because most of their customers refuse to use protection.