By Crazy Monday Reporter | 5 years ago 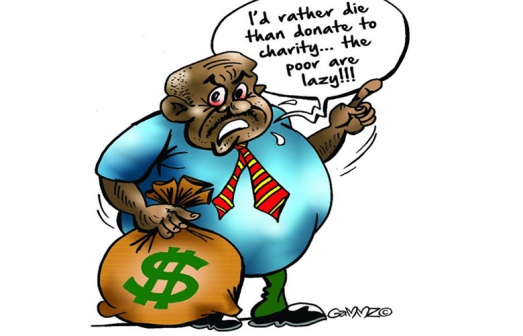 Last week an elder, Zachariah Katana donated 23 acres of his land in Kilifi County for the establishment of a secondary school, a dispensary, a market and a chief’s office.

I found the news weird in the sense that Mzee Katana is not your average tycoon. If the description of his lifestyle is anything to go by, then, we can as well safely consider him a peasant. But what a big heart!

This got me thinking tycoons hoarding hundreds of acres of idle land should be ashamed of themselves. It’s strange and ironic that around here, a peasant can have such a big heart, yet the best middle class folks can do is buy land from peasants and do nothing with it. And the rich, on the other hand, steal land meant for schools, markets, dispensaries and chief’s offices.

I see tycoons brag about their wealth and wonder. On Facebook, for instance, there are these childish tycoons who will stop at nothing to show off. Some will boast of how they live in lavishly-furnished 20 or so room house in the city’s leafy suburbs. They will show off their luxury sports cars. Others will brag about their gold plated cutlery, and let the whole world know that their laundry — including underwear — is done at a five star hotel.

I keep wondering, how much wealth does one really need? Real tycoons like Microsoft’s Bill Gates, for instance, made such dizzying amounts of money that at some point, he resigned from the company he founded and started giving all that loot away though charity.

American business magnate Warren Buffet, who is one of the wealthiest people in the world, lives in the same three-bedroom house he bought in 1958 and has pledged to give away 99 per cent of his wealth to philanthropy. That sort of stupidity would be laughed out of town in Africa, more so in Kenya.

Here, when people become wealthy, they join politics not only to protect what they have, but also to launder more loot. Those in privileged positions within the civil service equally join politics after retirement, having spent decades spooning up the fat of the land. Basically, for our rich, enough is never enough.

But what do they do with all that money? They buy pieces of land all over the country and do absolutely nothing with them. They build many humongous, and often ugly, homes. An average tycoon around here owns several homes in Nairobi, another in Mombasa, a villa or two in the village and, for those that are properly well heeled, rental property and homes in European capitals.

And when you visit their rural homes, their magnificent castles stand out rudely like a sore thumb — a top the hill, ring-fenced, guarded by barking dogs and mean-looking guards; islands of glittering opulence surrounded by grinding poverty.

The women in those villages trek for miles to collect muddy water from a seasonal springs; the children die of malaria and pneumonia; alcoholics stagger and lie spread-eagled at the marketplace; those with mental disability shuffle from one end of the village to the other; pupils at the nearby primary school share one textbook. All the while, the area tycoon sits on his loot, hoarding it, urging it to lay eggs!

And you know what happens when our tycoon dies? His children — and wives — fight viciously for decades for a share of the spoils.

In fact, were these dead tycoons to rise from the dead, they would curse why they never donated their billions to charity.