Who among us has no sponsor or does not sponsor? Leave the poor girl alone! 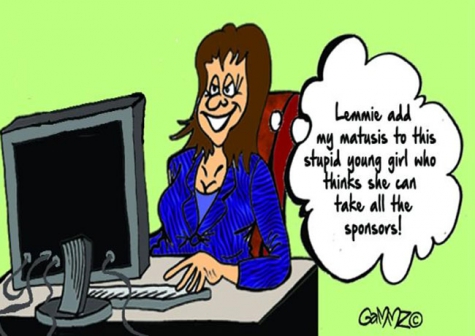 Who among us hath no sponsor, hath not sponsored? I will never have enough of the Biblical scene where Jesus is cornered by a barbarous multitude baying for the blood of an adulterous woman.

To me, it’s a prodigious scene which sets out the Nazarene as an enthralling character even unto heathens, the gentiles alike. Over many a Christmas and Easter, I have incalculably watched different video versions of the captivating episode recited in the Gospel of John.

In the incident, the murderous mob sets up Jesus teachings against the law of Moses, hoping to catch him with a lasso but end up in the noose themselves. “Master, this woman was taken in adultery, in the very act. Now Moses in the law commanded us, that such should be stoned: But what sayest thou?” they asked him.

Rather than answer them, John says, the Nazarene stooped down and scribbled something with his finger on the ground in a manner likely to suggest that he had not heard them. If you are a curious type like me, you would pay eternity to know what he was scribbling. They pressed on, the multitudes: “Tell us what you would do, hata kama ni wewe?” Then he lifted himself up and said unto them: “He that is without sin among you, let him cast the first stone at her.”

John reports that upon uttering those immortal words, the Nazarene, again, stooped down and continued writing on the ground. He also reports that when they heard about it, and convicted by their own conscience, filed out one by one. In the videos I have watched, the fellows file out pitifully until the woman is left alone, standing. Effectively, she is the only woman left standing in history. And then Jesus turns from his writing, a cunning fellow, and asks her: “Where are those thine accusers? Hath no man condemned thee?”

Fast forward 2000 plus years later in Kenya, a barbarous online multitude descend on a young girl for having a “sponsor” of a man.
Unfortunately for her, the Nazarene is long gone, and now sits on the right hand of God’s throne. With no one on her side, she has been flayed and splayed alike with all manner of words, labels and tags.

Now, which among her loudest critics have not heard a ‘sponsor’ at some point of their lives? Who among them has not been a ‘sponsor’? Right from the top to the bottom of the Kenyan society, the narrative of sponsorship is all too familiar. President Uhuru Kenyatta’s political journey was sponsored by retired President Moi. Without old Moi’s sponsorship, Uhuru would probably be a wreck by now. Now, the stone the builders rejected in 2002 has now become the cornerstone.

His Deputy William Ruto was sponsored by the likes of Cyrus Jirongo and even possibly the late Jacob Juma to make it in life. Generally politics itself is all about sponsorship by godfathers and political parties. Aspiring businessmen and women are sponsored into big businesses, especially state businesses, by sponsors. Pupils from poor backgrounds are sponsored through school by sponsors, more often than not, from abroad.

The NGO movement is proudly sponsored by wealthy philanthropists, some who left vast estates to promote their ideals and chosen causes. Families of activists are essentially living off rich sponsors for promoting their cause. In offices, some of us sponsor colleagues on things as mundane as coffee sachets, sugar and biscuits. All this is sponsorship in word and spirit. Again, who among us hath no sponsor or does not sponsor? Let him or her cast the first stone. I can see people filing out one by one and leaving the girl standing alone and a stooping Nazarene. [email protected]