Leaders that Kenyans can easily sue for vomiting on their shoes 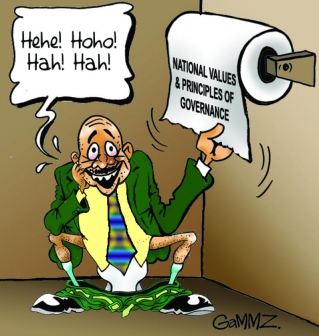 Most Kenyans, including senior state and public officials, appear to have slept through the 2010 revolution and now vomit on their subjects’ shoes with impunity. The pronouncements, behaviour and ethos espoused by public officials in conduct of public life betray a nation that is living in the past.

Article 10 on national values and principles of governance, article 28 on human dignity and article 73 on responsibilities of leadership were monumental game changers which, subtly, changed the landscape. The 2012 tribunal which removed former Deputy Chief Justice Nancy Baraza further solidified the gains of the 2010 constitution by listing over 100 national values “illustrative of Kenya” and which public officials and those who seek public office must abide by.

The tribunal fleshed out for Kenyans the basic ethical values presupposed and implied in the interpretation and application of the three articles I have listed up here.

“The evaluation of conduct of the holders of public office at all levels extends beyond the provisions and limits of legislation. It includes and presupposes the social domain, whose expectations are taken for granted within society, though not expressed in written law,” the tribunal said in its final report.

When a Cabinet Secretary like Jacob Kaimenyi is spurned by Kenyans to the point of reportedly being cursed by his community, he abuses the values of acceptability and likeability. Kenyans have seemingly refused to like him despite his visual amiability. Through his stubborn refusal to quit public life, he has also violated other values illustrative of Kenya among them “conscientiousness” and “amicability”.

He has proved himself unnecessarily argumentative and burden to his appointing authority. When a fellow who seeks to lead a public life like Evans Gor Semelang’o serially cons Kenyans of their emotions by purporting to run for this or that office, then pulls out last minute, he demonstrates lack of respect for Kenyan people. With a good lawyer, Kenyans can successfully sue such a character!

He gave every impression that he was a serious contender for the football elections last month, including running a flamboyant campaign, but he was nowhere to be found on the ballot. Before that, he was supposedly a serious contender in Mathare by-election. He obviously lacks the values of tenacity, conscientiousness, contentment, consistency, leeriness and verity which the Baraza tribunal vouched for in public life.

Under ordinary circumstances and strict adherence of constitution, Evans Gor Semelang’o cannot qualify for any public office after the spate of “withdrawals” he has subjected Kenyans to. When the Attorney General of the republic proffers wrong advice to the highest office in the land, not once or twice but severally, and remains unapologetic, he cannot stand the test of the 2010 constitution.

He lacks the values of cautiousness, concern, carefulness, correctitude, remorsefulness, reliability, prudence among others. When a newly crowned Cabinet Secretary like Charles Keter engages in political campaigns in total disregard for principles of public service, he dishonors himself among the Kenyan public. He trashes the values of fidelity, faithfulness, fairness, sobriety and honesty among others.

Essentially, what he has done is to spit on the people of Kenya and their doggone values. He ought to be fired in ideal circumstances for betraying the will of the Kenyan public. Finally, the President and his Deputy. We are on the fourth year of their five year mandate and they are still making the same promises they made over election period. The promise of free laptops for Standard One pupils remains just that, a promise.

The promises of new stadiums, new tarmacs, new jobs remain a pipe-dream. The promise to implement the constitution in both letter and spirit, the promises! How the dynamic duo will face the Kenyan public and seek re-election against this spectacular failure to keep promises will itself set a new record of post 2010 times.

I have not even weighed all these fellows on the scale of integrity which presupposes complete soundness of moral principle and character. They would all fall flat. The provisions may appear harsh, even unrealistic to some. But that’s the promise of the 2010 Katiba.