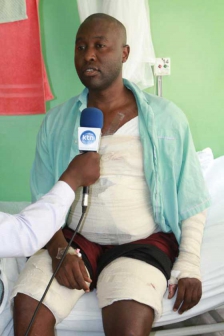 Senate Minority leader Moses Wetang’ula has rolled from one image challenge to the next with brazen boldness of a Kenyan socialite. The latest incident should not have made the news. But then again, in Kenya, no one passes up good gossip about prominent personalities. Have you heard? Moses Wetang’ula and his wife Ann both filed domestic assault cases against each other at a police station.

The details around the domestic spat were sketchy but the newsmakers on social media arrived at conclusions quickly and Wetang’ula was turned into a subject of ridicule. Every time a married man accuses his wife of assault (read beating him up), he rarely attracts sympathy and empathy from his male peers. Instead, the snickering starts behind his back and the gate keepers of all things Africans emerge from the thickets thumping their chests and rehashing the masculinity script aka ‘The Real African Man’ bible.

In our local media, cases of men caught on the wrong end of a spouse’s rage are reported tongue-in-cheek with the newscaster often suppressing laughter. When pictures of a domestically abused man from Nyeri County whose privates were severed emerged, wrapped in bandages like an Egyptian mummy the public reaction was, “I know I should not be laughing but this is funny”.

The underlying cultural belief in our hyper masculine society considers men who suffer from violence at home as weak. The kind to be shamed and ridiculed and pinned up as examples of men who were simply “not man enough”. Admitting to domestic abuse is taboo and as harmful to one’s social worth as, say, an erectile dysfunction.

When this level of reasoning is accepted as a ‘cultural standard’, it provides the incentive for men to be hyper aggressive. It enables a society of men who believe that their respectability as husbands lies solely in reminding a woman of her place in the marriage and if a few slaps is what it takes, so be it. Men who are emasculated by life’s frustrations, return home ready to blow a fuse over the slightest infraction committed by a partner.

Anger is a convenient escape from reality of an unhappy marriage and personal failures can be excused when we have someone to blame. Male aggressors of high social station enjoy the privilege and the benefit of doubt. The female victim with her confidence shattered, is left with the heavy burden of restoring her dignity and getting justice.

The domestic violence conversation in Kenya is centrally about women as victims and men as aggressors. Statistics have shown that women are four times more likely to suffer spousal abuse. The pervasive nature of violence against women happens at all levels in society. From the tin shacks of Korogocho to manicured gardens of Runda.

For largely this reason, battered men remain invisible, left with nowhere to turn, in a society that firmly believes that ‘weak men’ are second class victims squarely to blame for provoking the ire of their partners. What does man do when his wife turns violent? Man up! Perhaps! Dismissing the plight of male victims of domestic violence serves only to sanction violence as a tool of choice for asserting power in a dysfunctional relationship and ingraining the cultural stereotype that victims of domestic abuse had it coming.

There is no chapter in our inherited rites of passage that deals with the conflicting emotion of anger. Men are socialised to retreat from anger, bottle it up and cool off with a drink at the bar. Anger is not something that is resolved. It is an emotion that has to be repressed for the modern African man must remain a beacon of control. Men are socialised by example to restrain, to remain cool and refrain from hitting back. When the violence becomes cyclic, one would rather live in denial to salvage whatever is left of male pride than admit abuse.

Domestic violence is not bound by gender, economic status, social station, age, culture, race or religion. Addressing domestic violence through a singular gender viewpoint undermines the equally real struggles of abused male victims. We must not only teach our sons to respect women but to alsow recognise when they are being abused by women. Do not be a silent victim, entrapped by pride. They say relationships never die a natural death. They are murdered by attitude, behaviour, ego or ignorance.