Are Siaya leaders so bogus that MCA is laying claim to Machakos' Alfred Mutua?

A fortnight ago, an MCA in Siaya decided to defy a well-known African truism often spoken in hushed tones. It’s only a mother who knows the father of a child. Anyone else- including supposed fathers -have no idea. They can only guess. Central Alego MCA Leonard Oriara surprised everyone who believes in African values and wisdom when he announced he knows the father of Machakos County Governor Dr. Alfred Mutua.

According to the MCA, Mutua’s father is Habil Otieno Lut from Kalenjuok village. His real name (Mutua’s name) is Alfred Otieno Odango. His sister works for Sabena Airlines in Brussels. Mutua is the eldest. “Mutua is our son and if he decides to come back home, we will elect him,” he told a local newspaper that is only read by smart people, The Star. Too much information from a man!

Mutua himself was shocked by the new revelations, the sort of shock that makes you simply laugh for lack of better expression. 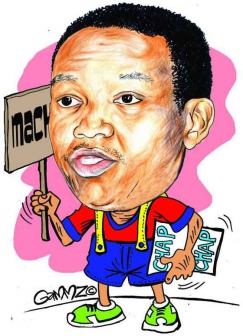 His mother, however, took on the MCA through a different newspaper, The Nairobian, warning the man against provoking the real Mutua’s father, her husband, who is alive and watching politicians “running out of their senses.”

The fact of the matter is that Mutua, like all of us, has only one father. He cannot have two fathers. The face-off between an outsider and the mother is completely unwarranted, and unnecessary. It is also a fact that Mutua appears to be doing better than his counterparts in other counties. The razzmatazz with which he executes his projects is undoubtedly unmatched and a measure of envy can be condoned.

The whole drama has nevertheless brought to the fore a number of questions which must be discussed in public. Is the poverty of leadership in Siaya so dire that leader, let alone the people, resort to laying claim on exemplary leaders from other parts of the country? What does this say of the current crop of elected leadership in Siaya? Have Siaya leaders, pardon the street parlance, ‘mollised’ up on their leadership credentials to an extent of annexing other leaders to come to their rescue?

Why haven’t the people of Siaya protested and demanded the resignation of their MCA for disrespecting and despising them? The answers to these questions lie with the people of Siaya. We can only speculate or theorise around them. The fact that the MCA, a leader himself, had enough courage to say this publicly tells a lot about what he thinks of the people and the leadership of Siaya. My speculation, and I could be wrong, is that he thinks lowly of them.

The fact that the people and leadership of Siaya did not reprimand him for the suggestions he was making about them also says a lot about them. Here, I have chosen to withhold my speculation. The idea that ‘coolness’ can only be obtained from the outer is as archaic a concept as the one which suggests exoticism is a reserve of the periphery. Siaya has plenty Mutua’s in its midst. There’s no need to claim the Machakos Mutua.

The whole drama also brought to the fore another puzzling aspect of human nature; one that’s expressed by the phrase of grass always being greener on the other side of the fence. A common joke goes that if an announcement were to be made for all men tired of their wives to dump them at Uhuru Park, the place would be bursting at the seams at the crack of dawn. Different sets of men would also be working at cross purposes.

Men leaving the grounds after dumping their nagging Eastlands wives would be surprised that all the women they crave after in Westlands and Kileleshwa would also be laden in buses, wheelbarrows and boda bodas on their way to be dumped - curvaceous ones, beguiling ‘lap-top types’, smooth-skins and what not.

On the other side, they would meeting other men, legends of seekers, arriving in tired Murang’a buses adorning funny hats and carrying staffs on their way to collect the dumped wives. Mutua and his Maendeleo Chap Chap is facing a lot of resistance in Machakos. What the people of Machakos do not know is that elsewhere, the man is being craved after- to the point of being honored with a second father. The incident is a wake-up call to the people of Siaya and the people of Machakos alike.