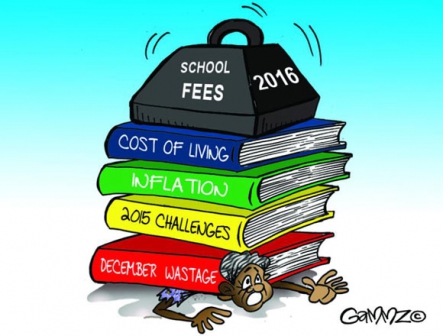 The spotlight always shifts to public education briefly at the beginning of January. It is usually after national exam results are announced and the scramble for Class and Form One placements in good schools gets furious.

One set of parents brim with the promise of good schooling as toddlers’ stride into class for their first year of formal learning.

The other half, who bankrupt their lives trying to give their children a decent education are found rubbing cheeks and staring at the limited options that exist for an average child, with average parents, who scored poorly in national examinations.

The current furore in the news was over high fees levied by public secondary schools in violation of government guidelines. In general school principals have developed a reputation for liberal interpretation of what supplementary fees cover. All this is going on as the government continue to issue empty threats. In my schooling days, hockey sticks and trips to the coast were a hot number.

The new Education CS Francis Matiang’i promised a ‘raft of radical reforms’. Like the average skeptical Kenyan, I rolled my eyes and tried not to think of laptops. Public education has been on free fall for a long time.

For the demographic that I hail from, public schooling was in hindsight a boot camp experience. School was not something one enjoyed, but rather endured.

Most parents could barely afford costs beyond basic education. It was fairly common for three quarters of the school to be sent home for school fees arrears. Students were caned for failing exams and not speaking English.

Academically poor students were routinely shamed by teachers. It was a belief of many educators that a good education was best administered with a cane in hand and fear was the basic motivation that drove excellence in class.

The stark difference in standards between private and public schooling continues to widen. Good schools mostly in private hands have become too expensive for the average Kenyan.

To join the ranks of elitism which a good education confers and a network of credible references to leverage upon, calls for a sizeable cash investment. The foremost benefit of a good school is the ability to speak well.

Learning to speak with a polished accent, otherwise known as the CNN standard, bestows a privilege that makes a world of a difference in the job market.

Kenyans have always understood the importance of good English as the first requirement of access to prestigious (read costly) educational institutions. We have gradually come to the conclusion that the US, UK, Australia, Canada, South Africa are really the only places to get proper schools and progressively undermined standards at home.

The quest for good schools overseas stretches back to the 30s, when the first generation of progressive Kenyans started sending their children to universities in the US and the UK. By the 1960s, further education in the west was a foregone conclusion for anyone wishing to secure their spot in the upper classes where proper English was spoken.

Going to a proper school was the half way ticket to elite membership. The most prestigious the institution, the bigger the perks. In 70s and 80s as I was growing up, the intellectual hierarchy was measured by the institution one attended.

Name dropping was fairly commonplace. Anyone graduating out of Harvard, Yale or MIT was described as a brilliant mind. Intellectual bravado was tolerated and no one took offense when a pompous tweed suited professor measured educational pedigree by asking: “When we were at Oxford, where were you?”

Framed photographs of happy graduates flanked by parents who beamed with pride lined sitting rooms all over the country. Proud parents were known to refer to their children only by their professional titles. My son the doctor, the engineer, the lawyer or the architect. It was the perfect Kenyan dream and a solid retirement plan for the labouring parent. That bubble burst a long time ago.

Children set up to fail

The vast majority of cash-strapped Kenyans are left with the single option of ill-equipped local public schools where the primary goal is staying focused during a long teachers strike and passing exams by any means necessary.

The 2015 national KCPE examination results are a reflection of this sad state of affairs. Coming off the back of a protracted teachers’ strike last year no one expected a miracle. No that it mattered. The national exams have evolved into a failing contest. An exercise when children are set up to fail and the teachers blamed for poor results.

The Jubilee government has been playing lip service to public education, making a fine mess of it. Teachers are frustrated and parents are at the mercy of profiteers controlling the sector. This kind of retarded thinking has to change. Free education is good but achieving good and inclusive education for all is what should keep the CS Francis Matiang’i up at night.