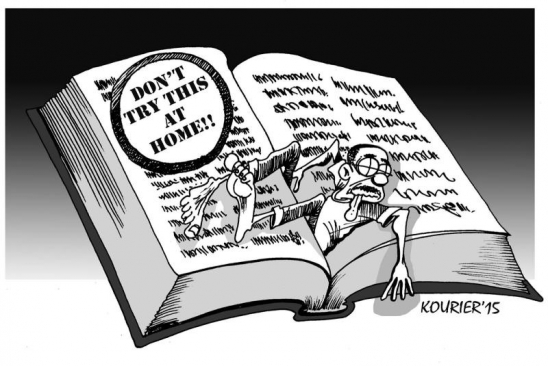 At this rate and following Kenyans’ growing penchant for litigation, a litigious citizen might just move to court and — as outrageous as it may sound — demand the Bible to be edited, with the warning, “Don’t try this at home” emblazoned at the beginning of every chapter.

We say this because the good book encourages Christians to pray and fast, so emphatically that it promises, “Anything asked in prayer shall be granted.” But some believers, like a man surnamed Chweya from Bungoma County, who tried to ‘dry fast’ like Jesus for 40 days and nights only to die in the process, seem to be taking some biblical injunctions quite literally.

That he risked his life by dry fasting — a deadly form of going for days without not just food but also water - is anyone’s guess. The tragedy has left puzzled locals wondering whether it was a silly case of tempting fate, or was Chweya simply forsaken by his God?

Chweya, a staunch Christian, seems to have taken the scriptures on fasting to heart and tried to emulate Christ by going without food for 40 days, only to kick the bucket while at it. He reportedly left his home and disappeared into the bushes on Mt Elgon for fervent prayers, which he claimed required solitary confinement — away from ‘earthly’ interference.

Locals who knew him say he was a spiritual and prayerful individual “whose prayers could move mountains”. Of course, his untimely departure left many, including his family members shocked. A village mate, who requested anonymity, broke the news to this writer, saying: “The guy was overly prayerful and spiritual. He apparently shared his idea of fasting for 40 days and 40 nights with his sister-in-law whom he lived with. The family has tried to cover up the cause of death, but his in-law had already spilled the beans to her sisters, who in turn shared with others. It’s so sad that he had to leave us that way.”

Perhaps, the informer added, the urge to equal or even break Jesus’s record is what drove Chweya to the wilderness, but in less than two weeks news wafted in that he had given up the ghost. Details about his death, for instance, the exact day he died remain scanty, seeing as he was by himself in the bush.

His corpse was found by a relative who went to check up on him in the wilderness. Interesting to note, however, is the fact that, as far as pushing deadly jokes too far is concerned, the late Chweya is not alone. He is actually in great company, if the drama we reported a while back of a certain pastor who treated locals at a village in Singorwet ward, Bomet County to is anything to go by.

The man of God fell off a tree and broke his limbs after he tried — get this — flying like an angel to Jerusalem using artificial wings. The man of God, famous in the village for predicting the second coming of Jesus on several occasions, something which has never come to pass, is said to have gone round the village announcing his departure to Jerusalem.

This, he said, was following an invitation by none other than God himself in a dream. Eyewitnesses said the pastor, who had tied improvised wings made of polythene bags and rags to his shoulders, had also spoken during his sermon early Sunday, of his imminent trip to Jerusalem.

“We thought he was joking until he appeared dressed in his flying gear, bidding people farewell,” said the witness. After a short prayer, the pastor asked curious members of his church, who had gathered to see him off, to escort him to a tall Eucalyptus tree, which he claimed was a suitable take off point, as revealed to him by God.

The pastor climbed atop the tree and parachuted himself, hoping he would defy the law of gravity, and fly all the way to Jerusalem. Unfortunately, he fell down in a heap with broken legs, hands, mangled face and all. Nervous parishioners, who thought he was on a suicide mission, alerted the chief who in turn called the police who ambulated him to a nearby hospital.

If you thought this madness is limited to Kenyans, think again. Farther afield, a Gabonese preacher drowned before his congregation awhile back after he tried to walk on water like Jesus. Of course, walking on water, as we all know, is not easy — in fact, it is near impossible.

Not many individuals can pull it off. Okay, let’s see, there’s Jesus Christ, and then, eh, well, that’s about it. But the man of God’s desperate attempts to equal or outdo Jesus cost him his dear life. The 35-year-old pastor surnamed Kabele, boasted to his congregation that he had the ability to reenact that walking-on-water miracle.

He took his parishioners to a beach in the Libreville. Referencing Matthew 14:22-33, the pastor said he had received a revelation that with enough faith he could perform miracles just like Jesus. Eyewitnesses revealed that just when the man of God waded into the water, he got completely submerged and never returned.

Elsewhere in Nigeria, at a zoo, a self-proclaimed prophet recently bragged that he was ‘covered by the blood of Christ’ and could pull off the biblical Daniel’s stunt of walking into a den full of lions. Despite stern warning from zoo keepers, the ‘prophet’ dismissed them and walked into the den as curious onlookers pitied him. In three seconds flat, the lions devoured him. Folks, take it easy, there was only one Jesus and you can’t out do him. No, you can’t!