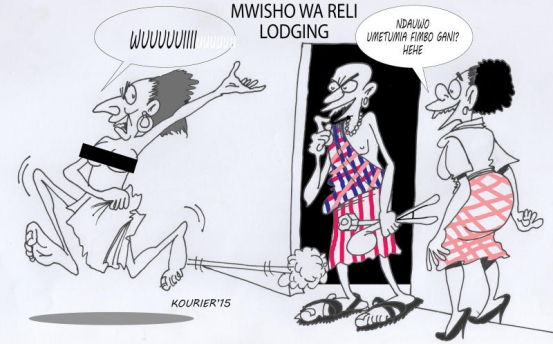 A Canadian woman believed to be a sex tourist got more than she had bargained for, forcing her to bolt out of a lodging in Nanyuki Town, Laikipia County, at maximum speed in the nude — clothes, handbag and shoes in hand — screaming for help.

This was after she discovered that the man she had challenged to a ‘bedroom marathon’ turned out to be a merciless ‘beast’ who hung like a donkey.

The woman, only identified as Tracy, is suspected to be in the country on a sex expedition. She had been joking to her local drinking buddies at a club she frequents that Kenyan men are ‘useless’ between the sheets.

Feeling a little let down, some of her friends at an entertainment joint set her up with a man famed in their circles for being ‘heavily structured’ down there, if you know what we mean.

Eager for the ride of her life, the thrill-seeking tourist gave in only for the ‘gland-to-gland’ combat to go awry. Perhaps to save face, the humbled Canadian has since gone into hiding, and none of her drinking buddies can trace her.

Locals from her circles at the entertainment joint allege that the outspoken tourist has an insatiable appetite for the forbidden fruit, and never hides her bedroom fantasies for local men.

Before she met her Waterloo, she is said to have been ‘using and dumping’ men in the locale, complaining that they were not good in the sack.

“None of the Kenyan men I have been with for the weeks I have been around has made me climax,” a drunken Tracy is reported to have joked to some of her drinking buddies.

The moneyed woman, nicknamed ‘white-pick-up’, is said to have been very friendly and used to pamper some of her boyfriends with goodies.

“It is obvious men who went to her were after money, nothing else. They pocked the cash and turned out to be useless in bed so much that she dumped them,” a drinking buddy to the tourist told this writer.

A drunk Tracy was re-introduced to a quiet and soft-spoken Maasai man only identified as Joseph, whom she had earlier dismissed. Tracy poked fun at her previous bed-mates, playfully telling Joseph she hoped he would be different.

Apparently, Joseph never boasted to her about being blessed with a king-sized member; he only promised her that he wouldn’t let her down.

In a moment of reckless abandon, the two slithered out of the club, and ended up at a lodging adjacent to the entertainment joint for a private moment of passion.

Hardly had they gotten down to business than Tracy sent out deafening wails for help, prompting the receptionist to rush to her rescue.

“We heard a woman screaming at the top of her lungs, calling for help, a few minutes after booking into the room,” the receptionist said, unsuccessfully holding back chuckles.

On her way upstairs where the screams were emanating, she bumped into a distressed naked woman, clothes and other personal belongings firmly clutched under her armpits, running down. “She didn’t want to talk, she zoomed past me breathing heavily,” added the receptionist.

A panic-stricken Joseph was found dressing up, and was at pains to explain to the small crowd of tickled workers at the facility what had transpired.

Despite the scandalous nature of the incident, Joseph bagged the bragging rights, and has now turned into a ‘celeb’ of sorts.