How social media has changed dating and social interactions 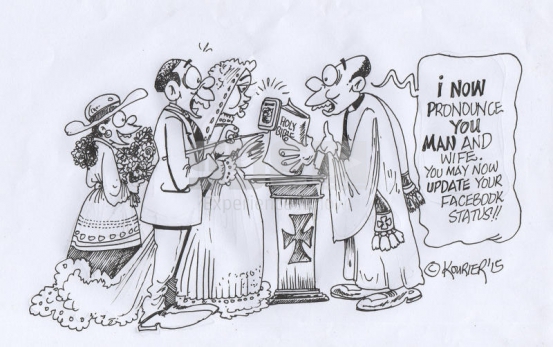 Dating life was a breeze in the pre-social media days. The mere fact that a man could cook a meal and cleanup after was enough to get a girl rushing to her clique to announce her good fortune. Nowadays, I am told of college girls from backgrounds so humble that the only running water they had ever seen before their arrival in the city was a muddy stream in the rainy season, posturing like prima donnas.

One year after college exposure, they will be Instagramming pictures of dinner dates at the Villa Rosa Kempinski with plates of food they cannot even pronounce.

How does a young man trying to make an honest living measure up when his under 30 peers are hiring choppers and making wedding proposals on mountain tops with accompanying pictorial evidence? Helicopters were the exclusive realm of old money politicians. Today, newbie politicians descending from the sky are so commonplace that an MP who shows up at a campaign rally in a Toyota Prado would be described as humble.

Standing out from the watus! Keeping up with the Kardarshians! Moving on up! are enduring slogans for aspirational Kenyans. Deep down, envy gnaws the hustlers’ heart. As Sauti Sol sang ‘Heri ulie kwa Range Rover, kuliko kucheka kwa boda boda’. When it comes to blowing money and living beyond our means, scripts are downloaded from the George Best school of extravagance.

George Best was an Irish football who played for the English Club Manchester United in the 60s and 70s era and was arguably one of better-known football celebrities of the post Pele era. He famously said, “I spent a lot of money on booze, birds and fast cars. The rest I just squandered”.

The real motivation for having money is to squander it in front as many witnesses as possible and thanks to social media, everyone can now enjoy their five minutes of fame. There is really no point of having items of value if you cannot show them off. This national hustler characteristic is of course a product of necessity.

Kenyan consumers are generally forward-thinking and the slow pace of national development can sometimes be a hindrance to social elevation.

Economists might label this country a third-world economy but our ambitions have always been Hollywood-certified and validated.

We live in a country where the nouveau riche would rather make personal adjustments to their lifestyle than wait for Government to fix the roads. Which explains how the helicopter got elevated to the most sought after time-saving vehicle. Last month, I toured a section of Luo Nyanza only recently made accessible by a road grader, where a new crop of young political aspirants have all built swimming pools in their homes in shags, claiming it made their villas easier to spot from the air.

Therefore, when I found out that June 30 is the official World Social Media Day, I could not help but envision a future filled with digital retards infatuated with technology. With 4 million people plus packed in a congested city, the pressure to stand out is only going to get worse with the increasing prominence of social media.

Our digitally connected world has created a breeding ground for deep envy. Social media has disrupted harmony among previously peacefully co-existing neighbours and friends with the tyranny of perfect lives. One does not even have to peep behind the curtain to feel like an underachiever.

Log into a social media network and depression begins to stalk you upon the discovery of an academically-challenged high school classmate who got straight Ds in his finals, thanking God for the brand new Land Cruiser VX V8 he just acquired.

Self-promotion has become a way of life and an experience has not happened until it has been shared and racked up likes. Someone goes to the gym and forgets to update their Facebook status and ends up feeling guilty for wasting a good workout. The first-time father’s list of priorities is as follows: Take selfie with wifey, tag my mates, update status and then hold the baby.

Communication skills for couples are on a whole new level. A young man asks his girlfriend how she is feeling and she replies “If you had bothered to read my tweets you would not need to ask.” It won’t be long before priests at weddings start to say “I now pronounce you man and wife. You may now update your Facebook status.”

We are enabling a compulsive selfie-addicted generation who consider privacy bad for their image. You do not even need a cable TV subscription if you have access to Facebook. The drama on social media platforms rivals any HBO series on the air.

Social media narcissism is the 21st Century equivalent of staring at your reflection in a clear pool of water and falling in love with it. God forbid, that someone stops to smell the roses and forgets to tweet about it, did it really happen?