The Narc MoU that never was: Should Nasa be worried?

By HUDSON GUMBIHI and ZACH MACHARIA | 4 years ago

As the National Super Alliance (Nasa) unveiled its presidential candidate at Uhuru Park, the same venue where former Head of State Mwai Kibaki was unexpectedly thrust onto the throne 15 years ago, the fate of the moribund National Rainbow Coalition (Narc) MoU must have worried the ‘weaker’ members of the Pentagon.

Question is, will the Nasa power-sharing agreement stand the test or will history repeat itself? Lawyer Danston Omari says that following the creation of office of the Registrar of Political Parties, an MoU is now a legal document admissible in court.

“MoUs are now legal documents protected by law, especially when they are declared in the full glare of the public. As long as they are deposited at the Registrar of Political Parties, a person who mischievously breaches the agreement can be taken to court,” explains Omari.

In the Narc agreement, the positions of vice president and two positions of second and third deputy prime ministers were to be shared between Wamalwa, Ngilu and Kirwa with Kibaki as the president. 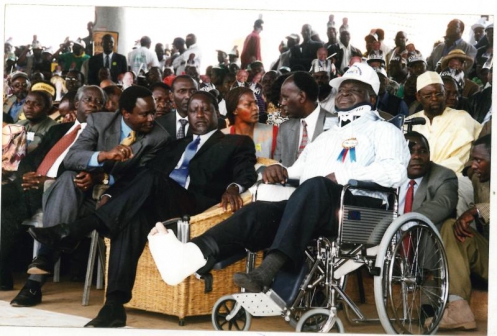 Kibaki became president with Wamalwa as his vice president. Kirwa and Ngilu were given Cabinet portfolios. Little was said of the two positions of second and third deputy prime ministers set aside for their wing of the coalition.

The Liberal Democratic Party (LDP) wing was to be allocated four key slots of vice president, prime minister, first deputy prime minister and one position of senior co-ordinating minister. The positions were to be shared between Kalonzo, Raila, Saitoti and Awori.

“The first deputy prime minister shall co-ordinate a class of ministries to be identified and specified upon formation of government,” read the MoU drawn on October 21, 2002 by Rachier & Company Advocates.

The two parties were to form a government of national unity as equal partners with membership of the Cabinet being determined on a 50-50 power-sharing formula.

The LDP brigade got none of the above positions. Although members were made Cabinet ministers, the omission set in motion a protracted and vicious struggle that led the firing of LDP wing of government when they floored Kibaki during the constitutional referendum that led to the formation of the Orange Democratic Movement (ODM).

The MoU should have remained in force until the 2007 polls — and any disputes or disagreement regarding the interpretation or implementation should have been settled by the heads of the Catholic Church of Kenya, Anglican Church of Kenya and Supreme Council of Muslims of Kenya. The Summit, comprising all the eight leaders of the two merging parties, was viewed as a key decision-making organ, though its exact role(s) were never captured in the MoU.

A sneak peek into Awori’s autobiography, Riding on a Tiger, reveals that the Summit became irrelevant as soon as Kibaki was sworn as the third president of the Republic of Kenya.

“After the Narc victory... President Kibaki never convened the Narc Summit, the top party organ made up of constituent major party leaders after the election... From the very beginning, ethnic rivalries, dissension over broken MoU promises and the division of power undermined the cohesion of the Narc government,” reveals Awori.

Nasa insiders Wetang’ula, Mudavadi, Bonni Khalwale, James Orengo and Johnstone Muthama did not respond to our calls and text messages, but Law Society of Kenya president Isaac Okero says it is too early to predict whether the Nasa agreement will run into turbulence.

“MoUs are legal documents that have the intention of effecting political agreements. However, Kenyans have learnt from history that they can be disregarded by parties that are supposed to actualise them. In Nasa’s case, they might succeed or history will repeat itself,” he stated.