Where neck to butt tattoos cost Sh150K only 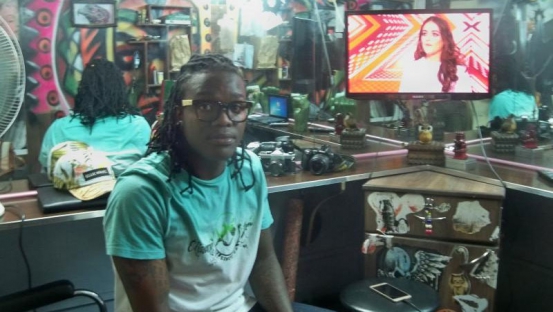 This man can tattoo your butt. Never mind how he introduces what he does for a living, but Eliamin Ali has been waking up and for the better part of nine years has been tattooing butt naked customers including celebrities, lawyers, doctors and corporate honchos.

Entry to his office at first floor of Solar House along Harambee Avenue has portraits of celebrities and other creative art on the walls. He also does matatu graffiti.

“I studied architecture at the University of Nairobi’ lower Kabete Campus but the art is more of talent I grew up with thus I do both tattooing and portraits by hand when not busy,” says the 28 year old father of one.

But you have to book an appointment for either a permanent or temporary tattoo at his office or your home. A simple common tattoo costs anything between Sh1, 500 and Sh2,500 depending on the design and part of the body.

The trending tattoos have moved from thighs and cleavages to...the tooshy for which Ali says “I do tattoos on any part of the body, butt tattoo cost Sh5,000 not less than that, with time I’ve gotten used to seeing customers naked because it my job.”

He adds: “Initially, it was tricky even for my family, sometimes people think there are happy endings during the procedure but for that to happen it means there must be bond between two people, in fact it is very hard.”

To achieve best design and visible tattoos, Ali uses imported ink dubbed Kuro Sumi and brand new needles from the US, “before starting that process, brand new needle is opened by client to show them that everything is handled professionally,” he explains, adding that, “I also pierce all parts of the body including ears, nose and other parts but I don’t do pierce privates because that needs doctors.”

Back tattoo that covers from your neck all the way to the butt will cost  Sh150, 000 a venture that recently took Ali all the way to South Korea to tattoo a client, besides tattooing others in Tanzania, the US and South Africa.

But some clients quit before seeing the results due to pain while others want a ‘happy ending.’

Ali trains talented youth for free and not only for them to eke out a living but also assist him when he is way.

What about couples who tattoo each other’s names only to break up thereafter? Well, Ali says there are laser machines which remove such inked regrets.