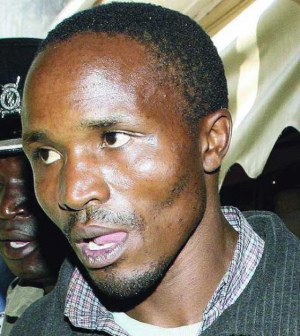 Philip Ondari Onyancha is the serial killer who shocked Kenyans by confessing that he had killed 18 women in 2009. Seven years on, DENNIS ONSARIGO speaks to the Kamiti Maximum Prison inmate and preacher about his troubled past and the voice that instructed him to murder

The growth that used to be at the back of your head and your fox-like eyes are gone. You look different! What happened?

I am a different person now. I am very busy. During the day, I take care of bookkeeping at the prison record office and I also double up as a preacher.

Why did you tell police that you are safer in prison than outside?

Because members of the cult could easily kill me for having betrayed them and spoken about their activities. I was never born a serial killer. I was moulded into one. I have now denounced the cult and I am a changed man. I know the families of the victims will find it hard to forgive me, but I ask for forgiveness. I swear that after the murders, I never feasted on the victims’ blood (as was speculated).

Do you think your childhood contributed to the kind of man you became?

I grew up watching a lot of pornography. By the time I was joining Kenyatta Mahiga High School, I was struggling with sexuality. I was sexually molested by our house help and grew up believing that I could get anything I wanted if I used force.

How was your life in school and how did you join the underworld?

My troubles were manifested when I joined Form Two. I used to sneak from class to go to a female teacher’s house where we would drink and do everything. She introduced me to the underworld. In no time, I was trapped. I started performing poorly in class and other teachers noticed. Something was pulling me to the teacher’s quarters every night. Someone was speaking to me, a voice was calling my name and I did its bidding. In Form Three, I was accused of sodomising a fellow student and because nothing could be proved, the administration did nothing to me.

What happened after you left school?

I never went back to collect my certificate, but my association with the underworld had become stronger. I still used to get instruction from the voice, and I would do whatever I was told to. The first time I was at my place of work and the voice told me to go to Nyeri. So, I went to Nyeri. The same voice would tell me that a certain woman will ask me for directions, and that would happen.

Did you ever feel guilty about the people you killed?

Yes. By the time I was being arrested, I had been toying with the idea of coming clean. I had wanted to call in to a radio station show and confess. After being caught, I confessed all my prior crimes to investigating officers who were following up on the murder and rape of a boy, my first victim.

And the second murder?

I was working for a utility company when I met my second victim. I strangled her along Riverside Drive and then dumped her body in a pit latrine. I would meet a lady and the moment I shook her hand, she would allow me to lead her anywhere, not knowing the devil was the one leading me. The hardest part was to get the women to shake my hand. The easiest part was strangling them. After killing them, I would snap back to reality.

What happened after you snapped back to reality?

I would feel so bad. I felt like I was trapped between good and evil. I would recall hearing my victims plead for mercy as I killed them, but I didn’t remember them dying. I even tried doing it to my wife when I wasn’t under a spell of the voice but it didn’t work.

Did the voice choose the victims for you?

Yes. I was to kill 100 women. The killing that troubled me most was Hellen Nyambura’s. She was 25 years old and I met her at Nkurumah Road. After the killing, her body lay there for several days. I went back more than 10 times to look at her body and asked myself if what I did was real. When police removed her body from the scene, I was in the crowd that had gathered to witness the operation.

Were you a captive of the underworld or just an agent of the devil?

When all this was happening, I was going through hell. Every time I killed someone, the voice instructed me what to do, and I would see other people. The people would urge me on and made sure I did exactly what the voice told me to do.

Did you ever speak to your victims?

What about the teacher who enlisted you into the underworld?

Elizabeth Wambui was the teacher. There was a time we met and she denied knowing me (Wambui was arrested in connection with the alleged cult activities in Onyancha’s former school. She told police that she had nothing to do with any cult). When a member of the cult speaks publicly about it, his powers wane.

You have been in jail for seven years and you might be freed in a couple of years. How does that make you feel?

I know my name and face are unforgettable and when I am feed, I would have to find a way of getting around in a society that once bayed for my blood.