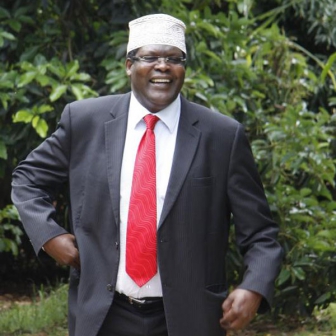 Miguna Miguna is eyeing the Nairobi governor’s seat. He dismissed other contestants, claiming Senator Mike Sonko is functionally illiterate, that Johnson Sakaja is a joyrider and Bishop Margaret Wanjiru can only run a Sunday school. DAVID ODONGO transcribed his recent interview with KTN’s Jeff Koinange

Are you serious about running for Nairobi governor’s seat?

Why do people ask that? Why can’t they ask about that joker Sonko? He is not qualified to be anything. He can barely read. He doesn’t know his role as a senator. Nairobi can’t be run by people who are functionally illiterate. What has he (Governor Evans Kidero) done? Garbage, floods killing people, impassable roads?

I have more degrees than Kidero. I have three and he has two. I have practised law in Canada for 21 years. Even (Prof) Makau Mutua is not licensed to practise law anywhere in the world. We are dealing with a pedestrian.

He has a doctorate in juridical science. PhD is Doctor of Philosophy. That short, bald man with low self-esteem and a conflicted ideological position who behaves like the senile Mugabe, can’t come here and besmirch my character when he is not at my level. I helped Raila win the 2007 elections which Kibaki refused to concede.

It’s (Prof) Makau who said my criticisms of Issack Hassan was uncalled for. Makau Mutua was the chief sycophant. He wrote articles calling for my head. Raila is being teargassed in the streets because of Makau. Makau said the chicken in the village knew Raila will win the 2013 elections.

I said Raila won’t be president. Makau said Uhuru couldn’t win. Uhuru won. Mutua said so many things, citing his so-called crystal ball. He is a hypocrite and politically senile. Because he thinks I am taller than him, darker than him, more handsome than him and more intellectually astute, he says I cannot be governor, and he doesn’t even have a vote in Nairobi.

Makau says you wear a hat to hide your bald head...

Why should a man speak about my hair? Why is he speaking about my body parts when my wife has not complained? He is indeed a pink man, as Mutahi Ngunyi called him. He lives in a reverie, it’s worse than a dream and I won’t join him in that nightmare.

You said you want Kidero’s job...

You think people will vote for you over Sakaja?

Who is Sakaja? What has he done? He climbed on Uhuru’s back to Parliament. Even in Parliament, he has never done anything (substantial). Even Uhuru tried to jump on Moi’s back, but he failed. He had to go back to the drawing board and work his a** off. Sakaja has to learn to work his a** off.

What about David Waweru?

That is worse than Sakaja. That one is a fly!

What about Bishop (Margaret) Wanjiru?

Bishop Margaret should restrict herself to the church. The city is a complicated institution. It’s too sophisticated. You don’t come from running a Sunday school and think you can run that (the city), and with no training on anything.

It’s the same reason Sonko should go slow. It is a mistake he was elected. He gives handouts. I have no problem hiring them in my office after I have won the elections.

I have to read Alai’s tweet because Alai backs Baba (Raila Odinga). Alai’s tweet reads, “Miguna will not even get 50 votes in Nairobi. He should vie for Ward Rep in Apondo”...

If I didn’t threaten anybody’s interest, why are they wasting their time? The only reason they don’t want me here, the reason they want me to go to Apondo is because they know that the thief they are supporting is funding their campaigns, they are feeling the heat, and I am here to give them that heat! I will take the 50 votes that he is giving me freely.

Somebody posted on Tweeter that you are broke...

They will keep saying such nonsense. Kidero said he is a missionary, but we want a visionary. Missionaries came before us, and paved the way for the stealing of our land. Kidero is the head of a cartel. We know he owns half of Kitisuru and half of Kisumu.

Another person tweeted that ‘there is no way Miguna can run for Nairobi governor without Baba (Raila Odinga) saying Miguna Tosha.’ Shouldn’t you apologise to Raila? Is it true that you can’t make it without Baba’s endorsement

I apologise for what? He should be the one to be sorry because he disagreed with me on a point when I was right and he was wrong. It has been proven and I have been vindicated. He is being teargassed because he didn’t follow my advice.

Another tweet says that, ‘save for Miguna’s pride and arrogance, he speaks a lot of truth’...

Truth is what Kenyans term as arrogance. Do Kenyans want me to speak like Makau Mutua? Do they want me to have a fake accent like him? This is a man who left Kenya as an adult and came back after a few years with an American accent.

That’s a demonstration of inferiority complex. I don’t have it. I speak the same way I used to speak when I was here. I don’t have to copy anyone.

Tell us about ICC...

When the history of this country will be written, they will have to reserve a footnote for me. I was Ruto’s expert witness. I am the one who deconstructed the ICC. Ruto found himself in a quandary. When he wanted documents to help him prove that he wasn’t involved, ODM refused to give him the information to prove that he wasn’t involved. Eventually, he came to me and I wrote a report, 158 pages. The documents I gave him help lawyers cross-examine the records.

Tell us about your candidacy...

I am vying to be governor of Nairobi because I have a clear vision and clean record. I have the background in terms of training, and given the fact that my opponents belong to cartels, I believe I can transform this city.

Why leave Canada to vie for governorship?

Some people say the coalition government was the best thing for Kenyans...

I heard (Mutahi) Ngunyi say that. That’s rubbish. It was a dysfunctional government. These people praise something that was rotten. Ngunyi should not speak on such issues. Let him speak for Jubilee and NYS.

Aren’t you afraid that what happened to Jacob Juma could happen to you?