Catherine Kasavuli: The city girl who defined ‘This is KTN’ 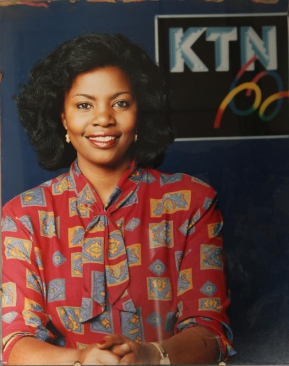 Catherine Kasavuli was born and raised in Nairobi West and went to Ngara Girls High School, but she wouldn’t say her life revolved around town.

“My father would drive my four siblings and I to the village for a two-week vacation during the long school holidays. It was a more of a voyage than a journey. My late father was very conscientious of the family on board the Fiat, so he drove at a safe comfortable pace, giving a little history of all the landmarks on the journey,” she said.

Her journey in the media began in 1980 as a radio continuity announcer when an uncle who listened to her reading the Bible and praying for dinner told her to go for it.

“He said I had a remarkable voice and that my expression, articulation and diction was also very good and urged me to try my luck at the Voice of Kenya where there was a vacancy. That’s how I ended up going for an interview,” says Catherine who was barely 18 at that time.

“We were 10 of us at the interview, but we were scaled down to three. Dorothy Nyong’o, Kisumu Senator Professor Anyang Nyongo’s wife, was in the interviewing panel,” recalls the veteran who has been in the media for over 30 years. She would later join television in 1985.

Thrown into the deep end with no professional training (she went to Kenya Institute of Mass Communication two years into her job), Catherine admits that she was initially timid and that it took her a while to sit in the office.

“I would sit at the office canteen or at the reception, afraid of sitting on someone’s chair and crossing their path.”

The glamorous TV presenter who would later command stellar pay packages began her career on Sh1,500  a month, although she earned a few extra coins voicing commercials.

“I would earn around Sh3,500 from commercials. One time in 1985, I earned Sh25,000 from a commercial and those days that was like Sh2 million! I not only joined a sacco called Sauti Cooperative but also opened an Eaglet account for my son,” she explains.

Catherine was part of founding team that saw the first privately owned station go on air in March 1990.

She was the first anchor to host a live broadcast at the station.

She says her first year at KTN was a discovery as well as novelty because the station was not only savouring freedom of expression but also broadcasting on a different wavelength the UHF ULTRA HIGH FREQUENCY requiring the viewer to purchase and install this new strange looking aerial.

Graduation from the VHF AERIAL used by the state owned broadcaster, it was the coolest thing ever!

But at some point, she says the team went overboard with their reporting, they were summoned to State House. (what exactly happened?)

“That was a close shave. Executive bosses were reprimanded in our presence and we dared not speak or breath. It was tense! But relief came when we were told that despite that misdemeanour, we were professionals with a refreshing approach to news gathering and delivery and were pardoned and directed to be impartial and balanced,” Catherine says.