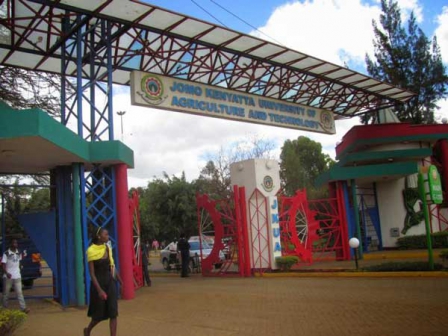 Students at Jomo Kenyatta University of Agriculture and Technology (JKUAT) are having sleepless nights, thanks to an invasion by bedbugs.

The university’s Juja campus is the most affected, and now students have been forced to air their beddings every so often to scare away the insects.

“To have a good night’s sleep around here, you literally have to dress like a soldier going out to war. You put on full gear, socks and masks included. This is Sparta, my friend,” says Wilson Nyangweso, a Third Year Actuarial Science student at the school and a resident of Hall 1 hostels.

“I sprayed my room three times this past week alone. Honestly, I’m starting to get used to the little buggers. Because no matter how much we complain, it’s like the Administration doesn’t care much,” said a frustrated Brian K’Owiti who resides in Hall 5.

A few students have opted to live outside the campus after bedbugs made life in the campus unbearable.

Most who spoke to Campus Vibe say that has been the situation for some years now.

“In all honesty, the hostels are in a pathetic condition. Guys find it difficult to have any decent sleep past 3 am. But we’re working on restoring order,” Loise Makena, the sitting Secretary for Accommodation and Catering at JKUAT’s student’s union told Campus Vibe adding that “plans are underway to carry out steaming across all the hostels. We have been using pesticides for the past semesters but that didn’t seem to work. So now we’re trying something new. Something more efficient.”

The bedbug menace has not spared the girls either. Many of them have had to air their mattresses as well or even to look for accommodation outside the campus.

Not long ago, Kenyatta University imported two bed bug killing machines, the first ever in Kenya (and East Africa). The two machines which cost millions were intended to end the reign of bedbugs at the university.

University of Nairobi too has had its share of headache with the bug.

Tyre Nichols' brutal beating by police shown on video
News
By AP
25m ago
Marriage on rocks: Many women just want a child, not a man
Lifestyle
By Peter Muiruri
5h ago
Tems becomes first Nigerian to be nominated for an Oscar
News
By Kirsten Kanja
5h ago
Japan launches whale meat vending machines to promote sales
News
By AP
6h ago
Jay Leno breaks bones in motorcycle wreck months after fire
News
By AP
6h ago
.