Shackles of Doom: Senator Malala walks the path he predicted in his play

By Gloria Aradi
2 months ago

Like a clairvoyant, Senator Cleophas Malala, then a blazing 27-year-old playwright and ward representative, prophetically scripted a contest which would thrust him into national limelight and leave him shackled. In his 2013 controversial play, Shackles of Doom, his endgame was pretty clear.

As Malala’s play caused a wild nationwide uproar due to its blunt and, according to some, scathing approach in addressing the uncomfortable topics of ethnicity and tribalism within the Kenyan context, he was resolute.

“The play simply talks about ethnicity. It depicts the way our society has been infested by the unequal distribution of resources. We are saying it is time we tackled the bull by its horns. We are saying we want to uproot the seed of ethnicity; we want to uproot the seed of tribalism. We cannot purport to talk about cohesion and integration yet we have not tackled the real issues facing us,” Malala told KTN of his purpose for the play amidst its complicated reception.

Seven years later, as the theatrics of the dramatic county revenue sharing debate rock the country, Malala’s play could not be any more relevant. Interestingly, just like then, Malala now finds himself on the ‘wrong’ side of the divide.

Back then, the Ministry of Education hounded him, but now, in what has been interpreted as an effort to force the young senator to backtrack on his advocacy for equal sharing of resources among Kenya’s counties, the police have hounded, shackled and finally released Malala.

Read Also: Shackles of doom for under ‘sieke’ Kakamega MCA

Shackles of Doom, which Malala wrote and directed, was a depiction of Kenya’s complex ecosystem of inequality, which has been amplified in the past few weeks by the raging county revenue allocation debate.

The play, which tackles the themes of tribalism and inequality of wealth distribution head-on, talks of a dominant community that intrudes the land of a marginalised community and exploits their resources for their own gain, leaving out the very community the resources belong to from enjoying the benefits. The play’s controversy culminated in a ban and disqualification from the National Drama Festivals by the ministry.

The 48-minute play was finally staged at the National Drama Festivals in Mombasa in April 2013, which had been organised under the theme, ‘Performance for National Healing and Reconciliation’. While proponents hailed Malala for his courage, others bashed him, accusing him of using the students of Butere Girls’ High School, who acted out the play, for furthering his personal agenda and promoting tribalism by singling out and criticising one community.

After the ban, the issue went to court, where High Court Judge David Majanja removed the ban and ordered the Attorney General and Education Permanent Secretary to ensure the play was staged at the nationals. Malala insisted that Shackles of Doom did not promote ethnicity, but rather, depicted the reality of injustice and encouraged harmony through its resolution.

The play begins with the dominant community marrying off one of its beautiful daughters, Wamaitha, to a son of the downtrodden community in exchange for land from the poor community. At first, Wamaitha looks down upon the community and disregards its worth. However, her community convinces and pushes her to marry into the community so they can get a share of the land and, in turn, become wealthy and control the economy from exploiting the land’s oil resources.

The dominant community, on the other hand, selfishly believes the investment will increase their wealth and change their lives, while disregarding the plight of the local Kana community. For 15 years, the dominant community undertakes the construction of the Mafuta Oil Refinery. At the launch of the refinery, both communities are ecstatic, until the Kana, the owners of the land, have a rude awakening when they realise they have been shortchanged.

At the helm of the company is the CEO, Kimani and his wife, who is the Human Resources manager. Shockingly, all the top positions, such as the chief supervisor and project manager are given to members of Kimani’s community, as revealed by the names of the position holders, such as ‘Njeri’ and ‘Maina’.

Angered, the True People of Kana protest. “What about us? The sole owners of the Kana,” they ask in shock. “Since we are a reasonable community and for purposes of cohesion and integration we are going to appoint from this indigenous community, but as a security officer,” the HR manager answers to the protests. When the True People of Kana complain over the lowly position, as opposed to the dominant community, which has gotten all the top positions, they are shut down fast.

“Why? Why are you doing this to us? For a very long time the smoke of marginalisation has been choking the True People of Kana. The weighing scale that distributes the national cake has always favoured you and fallen to our disadvantage,” the members complain.

Ironically, Malala was dragged from his home in Kitengela and driven 450 kilometres to Butere where he was accused of violating Covid-19 protocols by distributing masks. By the time his 72-hour ordeal was over, the debate about how to share out the national cake by the Senate was over and all an emasculated Malala could do was, like all the actors in his many plays, write a protest letter to the Senate, withholding the vote of his voters.

Even before he had been arrested, Malala had robustly pretested what he perceived was unequal sharing out of the revenue to the 47 counties in a manner designed to deny some of the historically-marginalised regions the much-needed funding from National Treasury.

In the play, just when the devolved units were being established, the fictional community of Kana complain that they are malnourished by poverty and are thirsty while the members of the dominant community quench their self-centred desires with ‘our precious liquid’. Fed up with the unfairness, the marginalised community starts rooting for a revolution. This echoes with calls by Senators Mutula Kilonzo Jr (Makueni) and Kipchumba Murkomen (Elegeyo Marakwet) while demanding for Malala’s release.

At the end of the senator’s tribulations, just like the ending he had envisaged in his play, there are calls for cohesion and equitable sharing of resources.  But it remains to be seen whether the revenue sharing debate, which has put Malala in problems, will have a happy ending, too.

How to start online writing business in Kenya 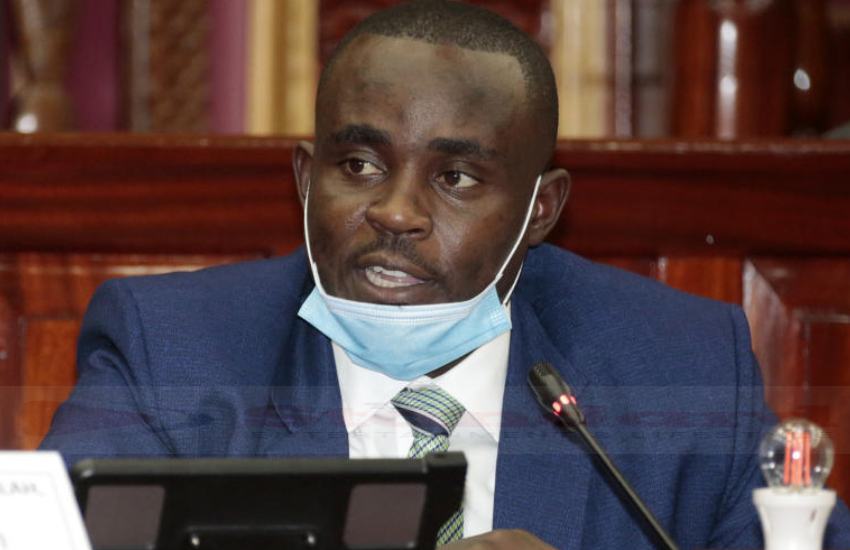