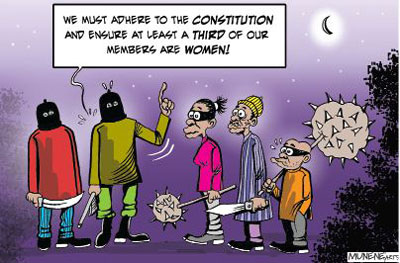 In a bid to ensure full implementation of the Constitution, female-based non-profit organised have raised concerns that one of the few remaining growth sectors in the economy — crime, is lagging behind in ensuring full inclusion of women in its ranks.

“Criminals and criminal organisations must realise that they are not above the law and must adhere to the constitution of Kenya by ensuring that at least a third of their members are women. They must, therefore, seek ways to recruit more women into crime,” said Teyo Lazarus, the Secretary General of the umbrella body of the female-based NGOs falling under the acronym ‘Whats’ (Weaves Here To Stay).

To ensure full compliance, Whats has called on members of the public to offer support by avoiding actions or utterances that deter women from crime.

“This they can do in several ways,” Teyo went on to explain. “If you are a man, for instance, and a woman accost you with an intention to mug you, don’t start making sexist remarks and asking for her number. She is there to make a living not to be asked out, so cooperate without delay.”

Whats also called on arm smugglers to introduce into the country female-friendly weapons as a way of encouraging more women to join crime. This would include firearms that are pink in colour and those whose handling won’t chip nail polish.

But in taking steps meant to ensure full adherence to the Constitution, Whats, however, warned criminal organisations against, er, making cosmetic changes.

“They must encourage and make the effort to enlist women in all their ranks, including the most lucrative positions,” the Whats secretary general said.

He noted with regret that the few women in crime have largely been relegated to shoplifting, spiking drinks to stealing from bar patrons, luring potential kidnapping victims to entertaining criminals in entertainment and drinking establishments. These, plus other poorly paying crimes that keep them held down in dead end criminal jobs.

Studies, however, show that some of the challenges that women in crime face include the fact that the weaves and handbags that are in the market are not aerodynamic. Thus, when women criminals are running away from the police they encounter a lot of air resistance.

“If more women are to enter crime, their hair and other accessories must be made in such a way as to aid getaway … the more they know they will get away with it, the more crime will be attractive to them,” said the Whats boss, adding that tight clothing restricts breathing, therefore, making fleeing from the police or angry mobs difficult also discourages female participation in crime.

The government has, however, not escaped blame. It has been accused of not putting in place measures to encourage more women to enter crime by not enacting legislation that guarantees female criminals workplace benefits like paid maternity leave.

If the efforts to have more women in criminal organisations bear fruits, social scientists have predicted that this will see a rise in the number of Toyota Vitzes and other pink-coloured hatchbacks being used as getaway cars in bank robberies.