This is why I went to court in I support of Maribe, Sen Sakaja

When Nairobi Senator Johnson Sakaja appeared in court during the bail hearing of embattled Citizen Tv journalist Jacque Maribe, some netizens criticized his move telling him that he should be tackling matters in the Senate.

A move that did not settle well with the Sakaja who for the first-time divulged details of his relationship with Maribe.

Taking to social media, the Nairobi senator set the record straight, tweeting that he goes way back with the TV journalist.

“Jackie Maribe has been my friend since high school. I have no apologies to make for standing with her,” part of his tweet read.

He further stated that at the end of the day he is human and has friends whom he supports.

“Before I’m a senator, I am a human being who has friends. If you are my friend, I will stand with you no matter which position you or I hold,” he tweeted. 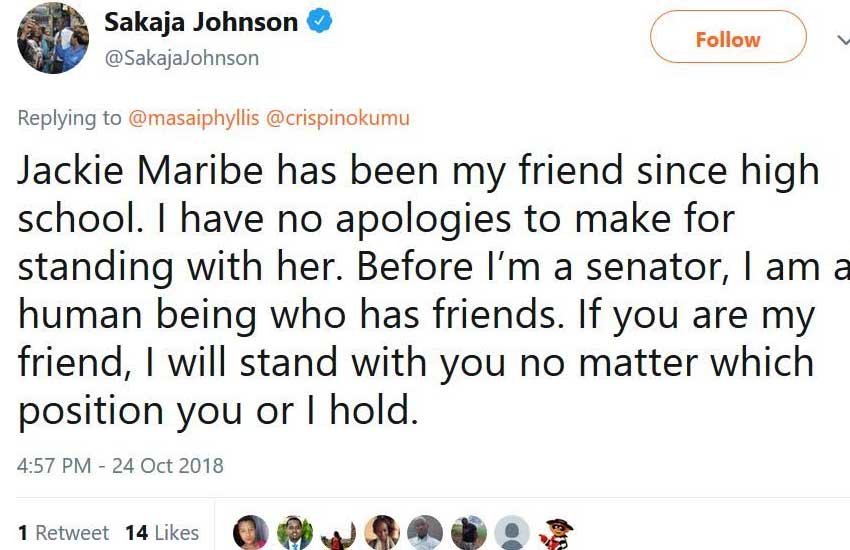 An explanation that resonated with some of his followers such as Masai Phyllis who wrote, “I believe the senator went in his individual capacity… That does not stop him from serving Nairobians diligently. Besides, he is already doing a great job than most of the MPs.”

Others, however, could hear none of it.

“Relax mheshimiwa, 2022 is just around the corner. The electorate has more pressing issues & Jacque Maribe is not one of them!” Tweeted another.

Jacque Maribe is being held over the murder of businesswoman Monica Kimani. Her bail hearing will be on Tuesday, next week.