Jubilee Party: A case of too much heat, no light? 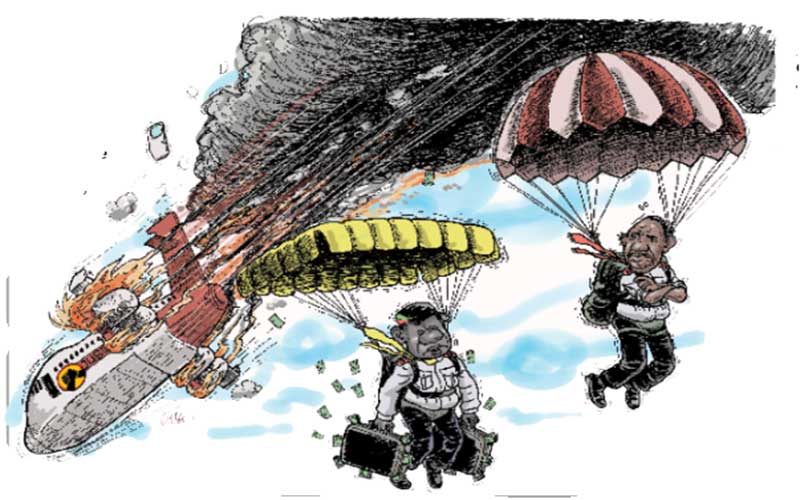 Have the wheels come off the once formidable Jubilee juggernaut? Fairly speaking, it wouldn’t be harsh to say yes. The riddle now seems to be who will take the blame for what is becoming Jubilee’s slow-motion death. The fairy-tale of how a nondescript party rose (and fell) will be written in the annals of history one day. History will detail how Jubilee (also) fell for the obvious pitfalls facing most parties in young democracies where mostly, parties are vehicles for the political class to capture power and to self-preserve. So who is to blame for Jubilee’s imminent implosion? Is it the side blamed for the corrosive tenderprenuer culture or the side that watched and looked the other way and bid its time to catch the thief in the act?

Whatever it is, things are not looking good. Were it not that the fratricidal war inside Jubilee is stalling the country, nobody would care so much. Rising costs, a weakened purchasing power, regulatory bottlenecks like taxes and other fees and mostly, the government’s failure to pay local suppliers as it scrambles whatever little funds there is to settle its debt obligations (approaching Sh6 trillion) have conspired to dim the rosy picture Jubilee painted seven years ago. Ironically, though the GDP has expanded significantly, jobs have become scarce. Fifteen NSE-listed companies have issued profit warnings in the last year as the going got tougher. Some have gone under, sinking the hopes and the livelihoods of thousands.

By any measure, the short and long term look quite grim. Online, the naysayers are having a ball. This poignancy is captured by a picture of a rain-soaked President Uhuru Kenyatta addressing a crowd. Behind him is a board indicating some of the lowest pump prices in the recent past. They have since gone up by up to Sh20. In simple terms, it means on average, the cost of living has gone up by a factor of Sh20 since the Jubilee administration came into office seven years ago. Government economists concoct fiscal stimulus plans to grow wealth and create jobs. The chief role of any government is to create jobs. So they have their eyes on employment, price stability through lower inflation rates, low interest rates, high economic growth through increased output and keeping the balance of payments at an equilibrium. Economists talk about a combination of fiscal and monetary policy often called the policy mix that spur growth.

They also create an environment where private sector players can create jobs as well by doing business with government. In spite of low inflation rates (below 6 per cent for most of the time), and low interest rates, things haven’t worked out well for Jubilee. And here’s why. In its first year in office, the Jubilee administration adopted a fiscal contraction approach to ignite the economic mortar. There is nothing really wrong with increasing taxes like the Value Added Tax slapped on some foodstuff and the import levy or the 8 per cent fuel levy tax that kicked in in 2018. After all, it helps to bring more money into the basket for spending. The problem only occurs when the Government decides to drastically cut back on spending and then raises taxes at the same time. That affects the economy in many (negative) ways. The administration also sought to disrupt and clean up the supply chain in government ministries through the formation of quasi-government agencies. This backfired. It became a conduit to distribute businesses to friends, relatives and associates of the new sheriffs in town. Media was the first casualty. Government advertising was withdrawn to save Sh2 billion. Never mind that a lot more get lost and media in its public watchdog role, often helps minimise the wastage and catch the thieves. Was this intentional? Second on the chopping board were the SMEs-those who by their very nature, ensured that money circulated in the economy. Even though penetrating the supply cartel was hard in the first place, the new players-because they lacked capital-contracted Nigerians, Chinese, Eastern Europeans and Russians who were hovering around posh hotels with hordes of cash to spend. This triggered unintended capital flight and slowed down economic activity. The money didn’t get into the economy, but the commodities did from China and other places. Aggregate production dropped off a cliff leading to unemployment. Yet still, these alone, have not been Jubilee’s worst mistakes. Incensed by the growing frustration from the masses, the rulers in Ancient Roman offered the people bread and circuses. It worked for some time until the folks realised they were being taken for a ride. Earlier in its first days, Jubilee profited from a sleek PR machine and a gullible public constantly bombarded with a torrent of social media postings. The commissioning of the Sh327 billion SGR in 2017 was billed the start of Kenya’s turnaround. It aroused patriotic fervour even among the doubting Thomases. After all, the 609km railway line was Kenya’s biggest infrastructural outlay since independence. This was no mean feat. Those charging them harshly were missing the point, declared Jubilee and its apologists as they laid out the biggest party to welcome Madaraka Express into the capital city. Jubilee’s blizzard of razzmatazz that followed the launch of Madaraka Express encapsulates most of Jubilee’s pitfalls. Too much heat and no light. It would seem like Jubilee was relentlessly driven by the quest to win accolades it forgot what really mattered. Even as Jubilee fumbled and mumbled, there are those who grudgingly give it the benefit of the doubt. Perhaps, they needed a little more time to deliver- they must have thought. Out in the streets, there is growing public apathy and cynicism. Slowly, the Jubilee narrative is beginning to sound like another costly mistake. Mr Kipkemboi is the The Standard’s Associate Editor for Partnerships and Projects. [email protected]

Most counties do not deserve more money

Noise over allocation of county funds is needless