How I beat 11pupils to win Africa's spelling bee contest 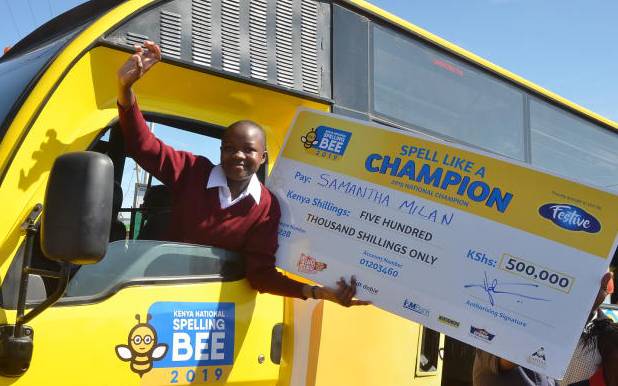 Samantha Milan, 13, a pupil from Siaya County, is the winner of the 2019 Spelling Bee National and Africa Championship competition.

Milan (pictured), who sat her Kenya Certificate of Primary Education (KCPE) exam this year at Nyamninia Primary School, was elated by the win which she says came as a surprise.

“The African Championship Competition was different from the Kenyan National Level One. At the national level, we had 20 seconds to spell a word while in the Africa Champion, we had 60 seconds," said Milan, who aspires to be a journalist, said.

Milan scored 382 marks in KCPE and has been selected to join Butere Girls High School in Kakamega County.

“We didn’t expect her to go up to the national level, being the first time she was participating in the contest. She is a very obedient, God-fearing and hardworking child...," said her father, Nicholas Bolo.

At the national level, she clinched position one and maintained the lead in the finals of the African championship in Jinja, Uganda, held last month.

Kenya was represented by Milan, Hope Wangui from Nyeri Primary School (Nyeri County) and Abigail Iteyo from Mudasa Academy (Vihiga County. All of them were in the junior category.

Milan got a cash prize of Sh500,000 for the African Championship and a laptop. She also received a trophy, and a tablet. Her school got a 26-seater bus from DT Dobie. Her teacher of English received Sh50,000.

This is our best chance to resolve education crises

This is our best chance to resolve education crises