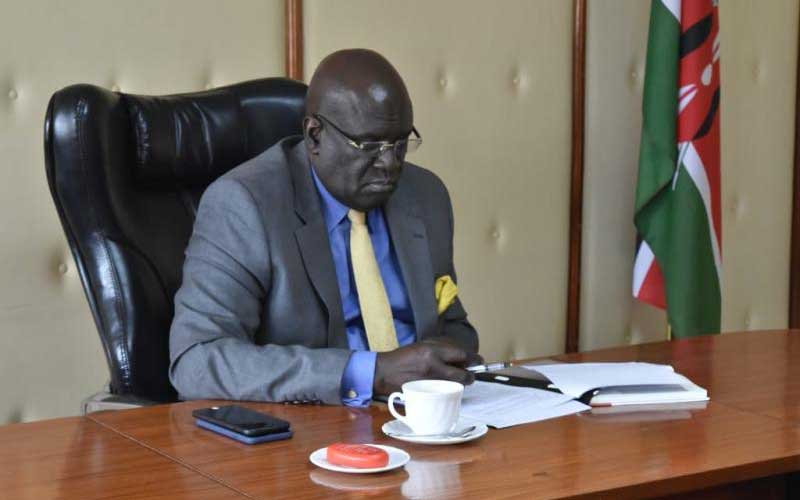 More than 650 medical students want Education Cabinet Secretary George Magoha (pictured) to resolve a lecturers’ strike that has dragged on for the past two months. Moi University’s School of Medicine has been dogged by incessant strikes in recent years that have paralysed learning and delayed graduations. The fate of 107 students expected to graduate in December this year is uncertain after lecturers walked out of classes on June 17.

Some of them have spent nearly ten years as undergraduates for a programme that ought to take six years. Students who spoke to The Standard in confidence at the school, which is located at the Moi Teaching and Referral Hospital (MTRH) in Eldoret, said the frustration and boredom was driving some of them into irresponsible behaviour. “I have wasted an entire year. I was to graduate last year, but I am still here. It has been frustrating. I have a child now. What else can we do if lecturers are striking every year?” a sixth-year student said. A Fifth-year student said her counterparts who joined Kenyatta University in 2012 will graduate this year while she had at least two more years to complete her studies. To make matters worse, the students have been caught in the middle of a war of words between lecturers employed by the university and those employed by the Ministry of Health and attached to MTRH.

Lecturers employed by the university and who belong to the Universities Academic Staff Union (Uasu) downed their tools demanding an increase in risk and call allowances. Hospital routines On the other hand, doctors attached to MTRH and who also teach students have continued working because they enjoy the two allowances. The Standard saw messages going round on social media discouraging students from taking part in routine practicals at MTRH. The messages warned that the students would have to repeat hospital routines when they (lecturers) return to work. Philip Cheptinga, a nephrologist/lecturer in school, said there was no hope the students will learn this year because there was no sign the stalemate will end.

Dr Cheptinga urged Prof Magoha to restore order in the country’s second-largest medical school, after the University of Nairobi. “Many students are depressed and there is no counselling for them. Most of them have been in this medical school for more than eight years,” he said. Kenya Medical Practitioners, Pharmacists and Dentists Union (KPMDU) North Rift Secretary General Ishmael Aiyabei attributed the protracted industrial dispute to ‘highhandedness and poor leadership’. He said lecturers are demotivated by unpaid enhanced clinical allowances, poor working environment, staff shortages, no promotions, non-remittance of statutory deductions and discriminatory labour practices like stopping dons from joining unions as well as salary cuts during study leaves and sabbatical. “We sympathise with the undergraduate and post-graduate students for the undue suffering over the protracted stalemate between the doctor lecturers and Moi University. We call upon the university to re-evaluate its steps in regaining its dwindling glory,” Dr Aiyabei said. A letter to the Education ministry by the Salaries and Remuneration Commission (SRC) dated August 1 notes that SRC had given the risk and call allowances a nod but the ministry had failed to furnish it with updated numbers of lecturer doctors and their job groups as at June 2019. The ministry had requested Sh1 billion to pay the lecturers between Sh66,000 to Sh80,000 a month for call allowance, and Sh20,000 as risk allowance. “The commission is agreeable to payment of the two allowances to the lecturer doctors given the dual roles they play in the universities and within the specific hospitals,” read the letter written by SRC chief executive Anne Gitau and addressed to the ministry’s Chief Administrative Secretary Collete Suda. Moi University management did not grant requests for interviews or respond to calls and messages for comment.