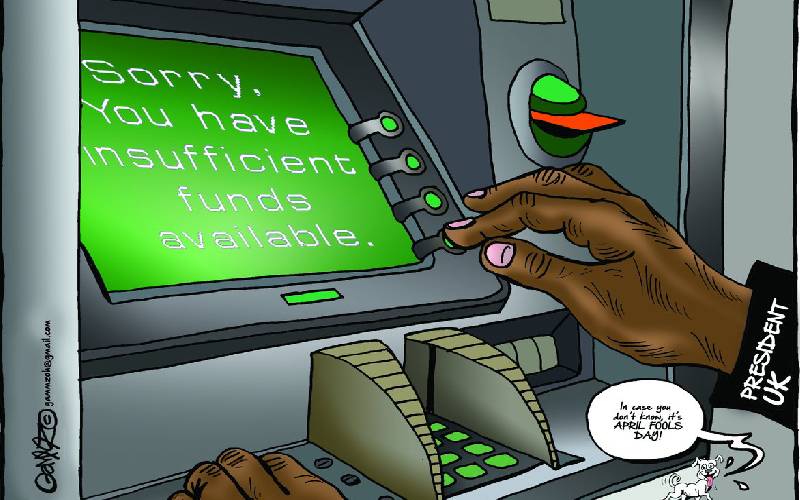 Constant complaints by Kenyans that things have gotten usually get brushed off by Government officials as mere whingeing.

Treasury mandarins have often bambazooled the citizenry with remarks of how GDP was growing and inflation has been kept within Central Bank of Kenya’s target range.

These are things that many Kenyans, many of whom only want to put food on their tables, do not understand.

Yet now, a new report, done by Central Bank of Kenya, Kenya National Bureau of Statistics (KNBS) and Financial Sector Deepening (FSD), confirmed wananchi’s fears that things are actually getting out of hand.

The 2019 FinAccess Household Survey found that a majority of Kenyans are worse off this year financially than they were three years ago.

The report highlights the hardscrabble life many Kenyans lead. Emergencies such as diseases and death leaves families with little money to invest or save.

Yet countless times, the Jubilee administration has insisted that the economy is doing well.

President Kenyatta has cited increased electricity connectivity, the Sh300 billion SGR, power generation projects and major road networks as spurring growth. Alas, that seems to be only that.

The truth is; for the 27 million Kenyans polled, their financial heath in the last three year has deteriorated.

The fraction of Kenyans who are financially healthy - those able to set aside some cash for a rainy day and remain with little after spending on essentials - declined from 39.4 per cent in 2016 to 21.7 per cent this year. That is staggering.

The survey indicates that six out of every 10 Kenyans were unable to meet their daily expenses in each income cycle. Nothing to be proud of.

Is the government talking a lot and doing less? If so, it needs to stop the show.

Kenyans want better jobs that can afford them not food on the table but also an improved standard of living.

The economy needs to be cranked up. Corruption, which costs the country job opportunities through theft and wasted resources needs to be fought tooth and nail.

That is being done albeit half-heartedly. We can’t move forward unless we get rid of those who steal from the public.

Additionally, we should address the pervasive redtape and the culture of anything goes.

Corruption feeds off these. Ironically, the World Bank has revised downward the country’s growth prospect (6 per cent) because of the debilitating drought.

It being an agriculture-based economy, the knocks from unpredictable weather patterns have far-reaching consequences.

And for that, Kenya’s best shot is in the full implementation of the Big 4 Agenda, and in particular, job creation through manufacturing and the adoption of a clean government devoid of corruption and wastefulness.

Trio with unenviable task of breathing life to economy