Poor left to own mercies in interest rate cap removal 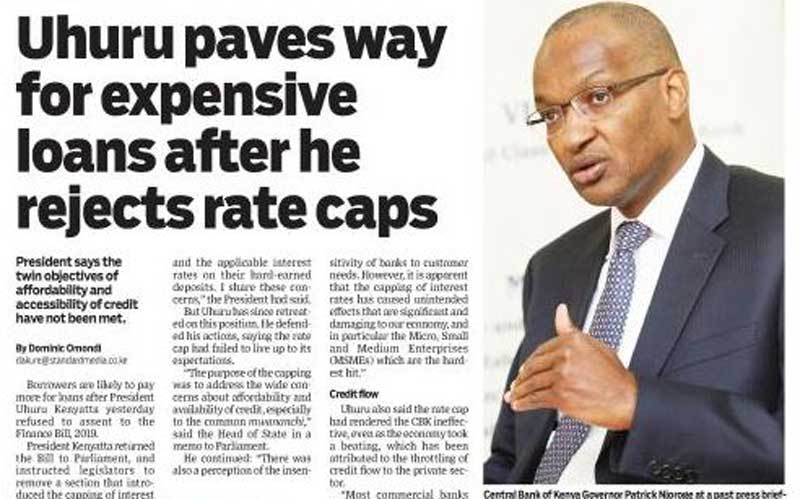 The spirited campaign to remove the cap on bank interest rates is most certainly not driven by a genuine desire to help the poor. Whereas I am no economist and therefore cannot authoritatively argue with the experts, what seems obvious is that a fully liberalised market in the banking sector has not and may never yield a credit regime that favours most Kenyans. Daniel Thornton, former vice president and economic advisor at the Federal Reserve Bank of St Louis, once made the powerful observation that “the hypothesis that the markets will do all of the work in controlling the funds rates… has been proven wrong numerous times.” The system is clearly prone to abuse, especially in small economies. Prior to introduction of the rates cap, the average bank lending rate was 18 per cent, compared to a 91-day Treasury Bill rate of nine percent. Some banks however charged as much as 25-30 per cent. In the meantime, the average return on savings was about two per cent. As I argued in this space then, it cannot be considered good business if a hawker deposits Sh1,000 into a savings account and earns about Sh20 after one year. And yet, if the same hawker were to borrow the same Sh1,000 for one year, she would have to pay a Kenyan bank about Sh250 in simple interest. This kind of business makes sense only to bankers and economists – not to us pedestrians. That is why rates cap seemed a reasonable way to protect a poor majority. The argument, however, is that in the three years the rates cap has been in effect, there has been a cut in private-sector loan growth because banks have avoided lending to customers deemed as risky – including small and medium-sized businesses. Interestingly, however, banks have continued to grow their profits. According to the Central Bank of Kenya, commercial banks’ profit before tax for the first four months of 2019 grew by 15 per cent to Sh56.8 billion compared to last year. At this rate, the banks will post profits in the region of Sh180 billion by the end of the year – hence smiling all the way to the vault. It is an undeniable fact that regulation is not advisable in a liberalised economy. The cost of goods and services are best left to market forces. The challenge, though, is that with a high percentage of the population living in poverty, the power to influence the fundamentals of economic activities is seriously undermined. Many are therefore left at the mercy of a cartel-like business sector that seems to artificially set the pricing levels of basic services and commodities. This has been the story in the banking industry. Every effort to bring down the cost of borrowing has been strongly resisted, with threats that it would adversely affect the economy. The truth however is that the main reason banks are not lending to the ordinary Kenyan is because of the government’s huge appetite for money. Banks therefore prefer the guaranteed returns from Treasury than engage the tedious and risky loan processes for the small fish. This trend is unlikely to change even if the caps are removed. In fact, the banks will now take the small fish at almost no cost and deep fry them for the government and high networth individuals for handsome returns. If the government is truly committed to giving us access to credit, then it should reduce its uptake from the domestic market, perhaps in preference for cheaper external loans. More importantly, it must upscale the fight against corruption, which is estimated to rob us of upwards of 30 per cent of government revenues. This means that for every Sh100 billion the government borrows, Sh30 billion goes into private pockets, thus forcing government to go back for more. Of course, there is the tiny matter of the caveats by the Bretton Woods Institutions. Having been set up to foster international free trade, the World Bank and the International Monetary Fund (IMF) have never supported the implementation of the rates cap. Unfortunately, the very founders of these institutions have now resorted to protectionist trade practices, with the latest trade wars between the US and China being the clearest indicator that no country can completely open its economy to whosoever wills. Kenya too must take its stand and pursue policies that are appropriate to its context and that favour its citizens. Pure capitalism is most certainly not suited for a nation where the rich minority have no qualms decimating the poor masses in unrestrained greed. Just check out what is happening in the mobile lending market. - The writer is the presiding bishop of Christ is the Answer Ministries. [email protected]