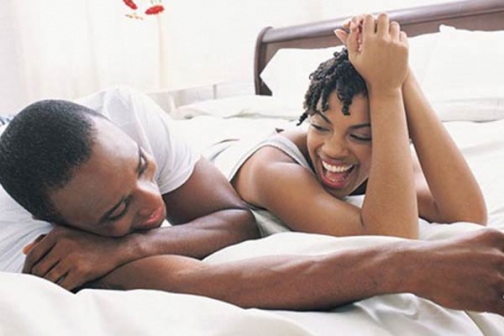 We've all been there: lying to our partner after a less-than-average experience in the bedroom.

Ever heard any of these? Then maybe it's time you and your other half had a chat...

Ms Cox says that while "sex can get better the longer you’re together in that it’s more intimate, loving and caring," she adds that "passion, lust and excitement need novelty to ignite."

No matter how many new things you try, she says, "it’s still the same body you’re having sex with all those years in - and your brain and body know it."

Yes honey, I had an orgasm when you did

Simultaneous orgasm is rare, Ms Cox says, because "most women take much longer to orgasm than men do, so he’s often done before we’ve even got to the halfway point" and "secondly, we’re talking split second timing given that both his and her orgasms generally last under a minute."

We have sex all the time

The average married couple have sex less than once a week, according to the 2012 National Survey of Attitudes and Lifestyles.

This, Ms Cox writes , is "a far cry from the 2.5 times a week figure that’s bandied about – and one hell of a lot lower than couples who claim to be doing it every day."

Also a lie, according to Ms Cox. In a recent US survey, 63 per cent of people said they’d confided in a third party about a problem in a long-term relationship while 73 per cent said someone else confided in them.

Around 37.7 per cent of the problems discussed were about sex and 50.8 about sexual infidelity.

If it’s a man saying this, there’s a very strong chance it’s true, Ms Cox says, but, if it's a woman, "it’s almost definitely a lie."

Men, she adds, "orgasm 90 per cent of the time during intercourse while women orgasm just 25 per cent of time, according to most research."

A 2010 study by Debbie Herbenick from Indiana University found 68.6 per cent of men and 51.7 per cent of women aged 25 to 29 had masturbated in the last month.

Ms Cox argues says this is "good thing because research indicates women who use sex toys have higher libidos and orgasm more easily."

I only ever think about having sex with you

The British Sexual Fantasy Research Project of 19,000 people found that 90 per cent of British women fantasise with most of these fantasies revolving around someone other than a current lover.

Of course I’m having more sex than you are, I’m single and you’re married

People in long-term relationships often look at their single friends with envy, imagining them having loads of lovely, lusty sex.

In reality though, single people have far less sex than married people do, even those who’ve been together for a long time.

Research from a study of nearly 6,000 people aged 14 to 94 found 61 per cent of singles hadn’t had sex in the past year compared to 18 per cent of married people.

By Stephanie Wangari 15 mins ago
Ruto's acceptance speech; There's no room for vengeance