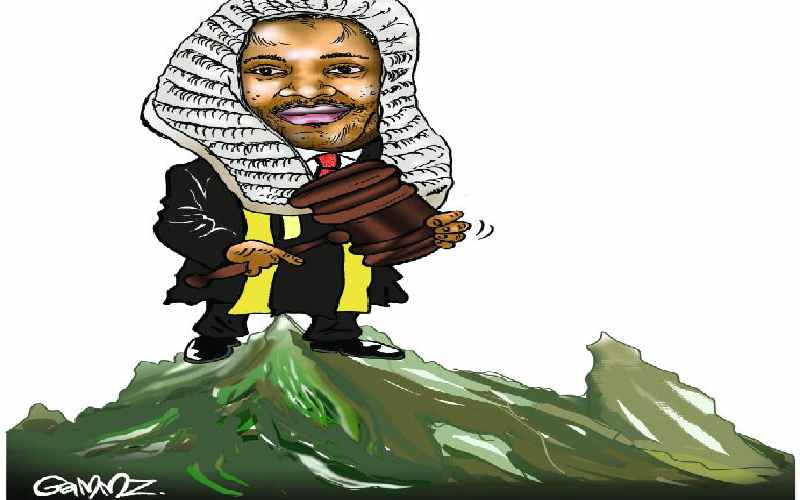 A Mt Kenya legend goes that a season would come when a famous leader would leave the kingdom without anointing his successor.

Then a little-known man from a small tribe would emerge and take over the mantle.

And so it was last weekend in Meru County. Clad in a spotted traditional robe, fitting hat, holding a shield and spear, National Assembly Speaker Justin Muturi had elders from the Njuri Ncheke declaring him heir apparent of the mountain area.

His mask did enough to conceal his emotions, but his eyes betrayed the awareness of the huge task ahead of him.

But he was excited over his new assignment of being the region’s next kingpin. The elders coined a fancy term for the role — a spokesman for Mt Kenya East. At least they figured out that charity begins at home, because the whole of Mt Kenya region is big.

From a Speaker to a spokesman. Finally, he could open his mouth and melt hearts with his husky voice. And, in his new job, he could speak in public forums.

The imaginary chains that confined him to only speaking in Parliament had been broken. Freedom. Ah, what more could a man ask for?

Muturi’s coronation last weekend was quite the spectacle and, frankly, a significant upgrade to the roadside declaration issued by the late John Michuki, when he proclaimed Uhuru Kenyatta next in line to succeed Mwai Kibaki in the region.

JB’s story is impressive; he hails from the Mbeere community — a minority in Mt Kenya — and he strongly believes that he, too, can conquer the mountain.

That he could challenge traditions that don’t allow leadership to cross certain rivers.

That he could defy nature, and not wait for the gods to bring down a mugumo tree as a sign that leadership must change hands.

But the elaborate ceremony at the Njuri Ncheke shrine in Meru may be as far as his dreams go, owing to the long queue of politicos thirsty for the Mt Kenya crown. But, if Lupita Nyong’o is to be taken seriously, all dreams are valid.

And Muturi has always been the big dreamer. Even in his previous life in the Judiciary, the National Assembly Speaker stretched his hands, reaching out to grab more of what life could offer.

He started as a magistrate and rose to a principal magistrate. At one time, he chaired the judges and magistrates’ association.

In 2013, he sought the newly formed Mbeere North seat, but there were no pleasant surprises either. Muturi lost the race to Muriuki Njagagua. A 300-vote margin was enough.

Dealing with loss is difficult for anyone. It’s easier to get over losing an election when the results show clearly that one had no chance even if the results were cooked in their favour.

Anyone in his shoes — who had lost with such a minuscule margin — would have beaten themselves silly and taken endless trips down memory lane. But the new spokesman on the block has never been the one to sulk, and certainly not one who found pleasure in reliving bitter memories.

From the mud, into which his fellow Mbeere North constituents had hoped to sink him, he would craft his next plan. That of leading, among others, the MP who had been elected in his stead.

Muturi clinched the Speaker’s seat in Parliament, to become the third most powerful man in the country. He dethroned the philosopher, Kenneth Marende, in 2013 and retained the seat in 2017.

The country’s seventh Speaker now hopes to chart another path that starts as ‘speaking’ for a region, and later morph into seeking the country’s top job against the odds seemingly stacked against him.

Perhaps Muturi had that in mind, hence his look during his coronation, knowing that he needs divine intervention to climb two seats up. And as the elders chanted around him, he probably hoped that the gods didn’t mind the noise.