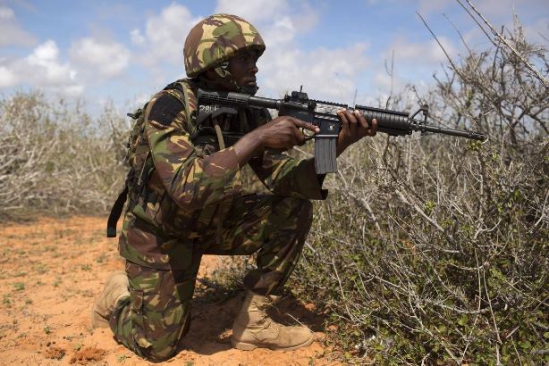 The first batch of security forces have set up camps in four regions within two counties bordering Boni forest, hours after the Inspector General of Police declared the area dangerous.

A battalion of the Kenya Defence Forces (KDF) together with the paramilitary wing of General Service Unit and police officers have pitched camp at Bodhai and Hulugo in Ijara sub County of Garissa County while another group has been deployed to Mangai and Baure in Lamu County.

The three-months operation is expected to flush out Al Shabaab militants reportedly hiding within the expansive forest along the Kenya-Somali border.

The arrival of the security team has caused fear and anxiety among residents many of whom were displaced from Basuba in Lamu where the militants’ activities have been on the rise since May. The families are ethnic Wata and Wasanye, who are hunters and gatherers that also subsist on forest farming.

Most militants in Jaysh Ayman, an affiliate of Al Shabaab, originate from Kilifi and Mombasa counties and have been linked to controversial mosques in Mombasa where they were, reportedly, recruited in 2001 and trained in Somalia. This group carried out the massacre in Mpeketoni and Hindi areas of Lamu and Gamba areas of Tana River where they also freed prisoners in police stations last year.

Some estimates indicate that close to 300 militants including foreign jihadists linked to Jaysh Ayman, roam the forest in northern parts of Lamu.

Separate group of militants linked to the late Mohamed Kunow alias Gamadheere are responsible for the attacks on police and KDF that began in May in areas around Korahindi in Ijara. The militants have since spread out to Yumbis and Galmagalla areas of Fafi sub county in Garissa, taking over mosques to recruit residents.

The two groups have exploited the forested areas on the boundary between Lamu and Garissa counties and sections of the Kenya border with Somalia that meets the Indian Ocean to launch guerilla attacks on KDF and police.

The most audacious raid on KDF was on June 14th when Jaysh Ayman militants raided a KDF post at Baure, in Lamu with rockets and machine guns killing two soldiers.

Eighteen militants including the group’s leader Luqman Osman Issa and British jihadist Thomas Evans Anthony were killed and three other soldiers died later when a KDF truck was hit by an Improvised Explosive Device.

Yesterday, Ijara OCPD Christopher Rotich however asked the residents living to move out to avoid being caught up in the operation.

Speaking to The Standard on Sunday on telephone Mr Rotich said the security teams will work hand in hand with other security organs within the forests to avoid clashing.

“The operation has already started and the teams have been deployed in the two regions and I appeal to the locals to cooperate and hand over any weapon they hold illegally to authorities,” he said.

On Friday, Inspector General of Police Joseph Boinett issued a Gazette Notice declaring the expansive Boni forest as a “disturbed and dangerous area” paving way for security operations to rid the area of Al Shabaab militants.

Mr Boinett said residents are prohibited to carry or possess any arms or ammunition.

Boni forest has over the years been thought to have provided a safe haven for not only Al Shabaab but also local militia blamed for the spate of killings that rocked Tana River County in 2012.

Residents have on numerous occasions indicated that the militants come from the forest to launch attacks in the area citing killings in Mpeketoni, Poromoko and Hindi.

By Caleb Kingwara | 13 hours ago