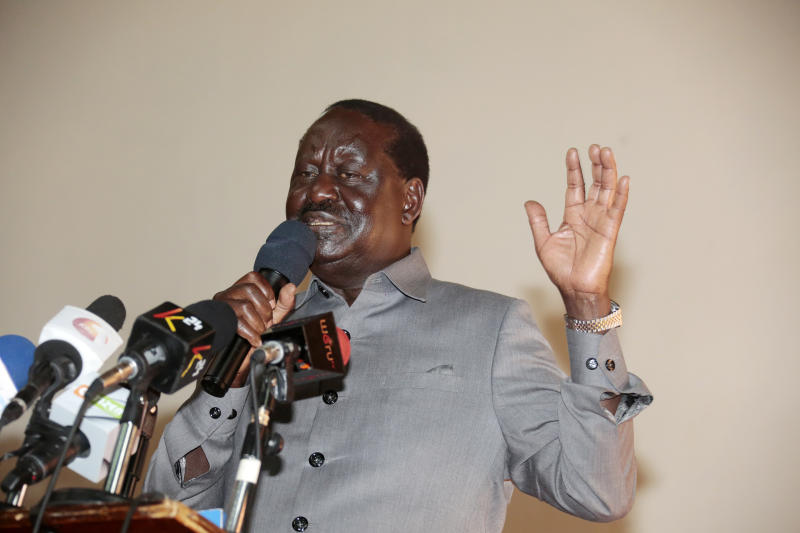 When warthog goes to the river to drink water, it enters the river by its rear so that if a crocodile grabs it, it pulls it out of the water by engaging a forward gear. That way, the crocodile is exposed to a battleground that it is not designed for.

Raila Odinga (pictured) is a political warthog; he approached the Building Bridges Initiative (BBI) by the rear and political crocodiles, including his former NASA principals, held his tail. Suspecting they were expecting his endorsement so as to make a bumper political harvest, Raila has pulled them out and has exposed their vulnerability. Now they are on political dry land — they must crawl back to their strongholds for survival.

But they are not the only ones who have been flabbergasted. The unfolding BBI scenario, I daresay, has also perplexed Baba too.

First, Baba was wrong when he used Msambweni by-election as a yardstick for BBI success. ODM lost in Msambweni, but BBI has shown early signs of success.

A few weeks ago, Raila confessed what I have always held in this column; that his 2022 decision on presidency would be determined by the BBI.

But he seems to have relented on that stand. In the last two weeks, Raila appears to have made up his mind that he’s going for the presidency. This means, the results of the BBI referendum will not be the determining factor on whether he will vie or not. He was wrong, therefore, that BBI would be a factor.

So why did Baba change his mind? Methinks he believed Senator Irungu Kangata’s hypothesis on the status of BBI in the central region.

That is why he openly started putting his house in order. That is why he decided not to tie BBI with his political future. He got it wrong again!

Furthermore, it seems the president’s recent covert pronouncement that he was unlikely to endorse Raila got ODM thinking. As such, they decided to anoint Raila for 2022 in an open field.

After deciding that he he would go for nothing but the top seat, Raila had to make it clear that he would not support anyone else — he declared he would not endorse any of former NASA principals; Kalonzo Musyoka, Musalia Mudavadi accusing them of abandoning him when he needed them the most during his mock swearing-in.

In a nutshell, Raila was thus wrong that his 2022 political compass was anchored on whether BBI would pass or fail. He is not ready to take chances and that is why he has engaged another gear and launched his 2022 presidential bid.

However, it is clear that Uhuru’s side has delivered its first cheque — most county assemblies, including those from the Mount Kenya region, have endorsed the Bill.

Another reason that could have made Raila to change his mind and vie is the fact that if he wants to be prime minister, he must first run as a MP. This clause on BBI should be amended immediately because it is ridiculous that Baba will have campaign for MP.

So why is Raila still showing interest in the BBI? Two reasons. There is the original BBI vision of uniting the country.

Secondly, BBI success will prove Ruto wrong and politically feeble. As long as the drive flags Ruto down as a loser, it would be an outstanding Raila achievement.

Third, the BBI Bill has already been clothed as progressive, beneficial to common mwananchi and an antithesis to the hustler narrative.

If it goes through, it would give Raila many good nights and Ruto as many sleepless nights. Because of this, Raila will dance to the reggae beat in every political drive campaigning for the BBI.

Raila has also given up on Uhuru’s endorsement because all efforts to oust Ruto out of the Jubilee Party have flopped. Until early this week, it was clear Ruto was not planning to exit Jubilee and or resign as DP. All the constitutional means under which the deputy president could be removed from office are also without grip.

Finally, it was clear that Raila was almost giving up on his political stand; after the NASA alliance seemed untenable; he seemingly started ‘arranging’ himself for a kingmaker.

I suppose that is why he threatened a 2002 moment by bringing on board neutral players such as Kivutha Kibwana and Mukhisa Kituyi. This has confused other NASA principals.

Raila must come back and pursue the initial BBI goal. Already the mood has been set: BBI has better chances. I’m still convinced his plan was not to go to the ballot if BBI passed.

Counties’ endorsement of BBI and its likely success could make Raila retract his political moves and endorse someone else. Let’s wait and see.

The other essential element in education reform is the teacher—the person who will ultimately take the curriculum to classroom, where the learner is.

The firm said the measures put in place by the government to contain the spread of the coronavirus suppressed demand for electricity.