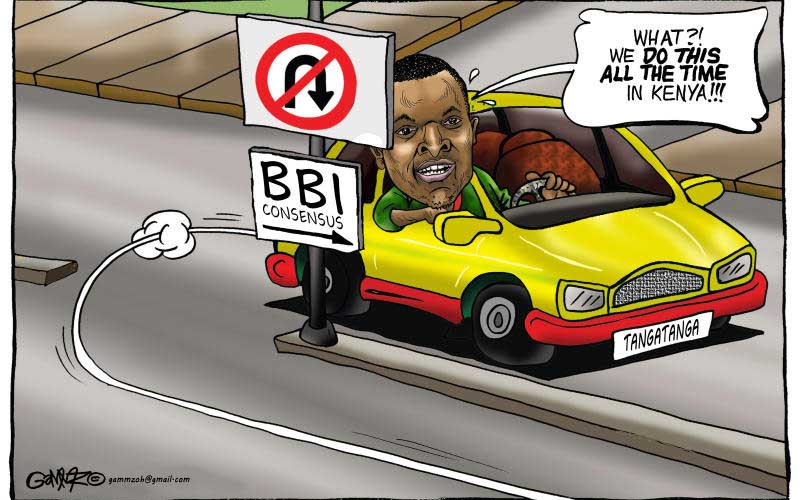 The road to a new dispensation seems to have begun on a positive note. What initially looked like a difficult mission, albeit important, is turning out to be an easy ride to the Promised Land.

As the former Prime Minister Raila Odinga rightly noted in a recent interview, the Promised Land is beckoning but it won’t come to us. We have to walk, nay, trek to it.

What is becoming clearer by the day, however, is that the trek might not be as torturous as it was for Israelites of the biblical times.

The Building Bridges Initiative has started achieving what the whole process was set out to: uniting the nation. Reports are already indicating that leaders whom were feared to oppose it have instead become its most enthusiastic campaigners.

The highest ranking politician to oppose the BBI, has until a few days ago, been the Deputy President William Ruto. But going by his statements at the weekend, the DP seemingly has encountered his Road to Damascus moment.

Despite being a "small fish" in the general scheme of national politics, the party leader Mwangi Kiunjuri has a following.

Initially a harsh critic of the BBI, the former Cabinet Secretary is reported to have beaten a hasty retreat, saying he would support the referendum.

Mr Kiunjuri, an ally of the DP, is quoted to have praised proposals in the BBI report for having factored in the interests of Kenyans, such as minimum returns for farmers, equitable distribution of the national resources and non-politicisation of the Independent Electoral and Boundaries Commission, hence the need to support it.

In other areas of the country, erstwhile foes are now closing ranks in support of the BBI.

In Nakuru, for instance, reports say Governor Lee Kinyanjui and MPs from the county, who have been critical of the document are now backing it.

We are told that unlike before, when the governor would preside functions with none of the MPs in attendance, he can now enjoy the support of a number of them with some publicly lauding his work. MPs Martha Wangari (Gilgil), Samuel Arama (Nakuru West), David Gikaria (Nakuru West) and Francis Kuria (Molo) joined the county boss at the launch of the signature collection drive last Friday. Wangari and Kuria initially opposed the document.

In Mt Kenya, Meru Governor Kiraitu Murungi is persuading those still opposed to BBI to change their stand to cross the bridge.

In Garissa, the reports point to a similar trajectory as Governor Ali Korane urged residents to support the document since it has addressed most of their concerns.

It is only a matter of time before others join in.

My greatest wish is that, at the end of the day, we will have an uncontested outcome of the referendum and eventually an uncontested country as all Kenyans indicated during the collection of opinions that formed the BBI report.

Previous article
Gender lens key to fighting Covid-19 pandemic in society
Next article
Agony for cancer patients who can no longer earn, socialise