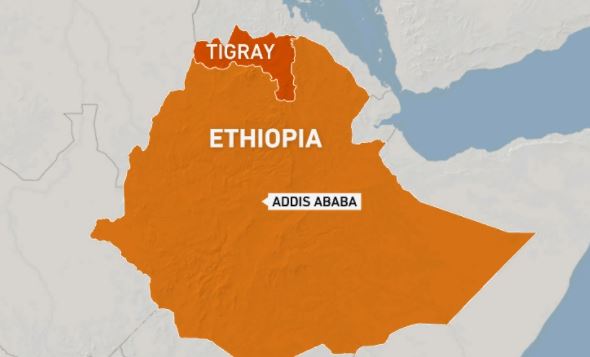 Ethiopia’s government, under Prime Minister Abiy Ahmed, is carrying out a military offensive in Tigray, Ethiopia’s most northern state.

A six-month state of emergency has been declared in the region. Dozens of casualties have been reported amid fears that nine million people are at risk of being displaced.

The offensive follows accusations by Ahmed’s government that forces loyal to the Tigray People’s Liberation Front (TPLF), the ruling party in Tigray, attacked a military base. There have since been reports of a number of airstrikes on the Tigray capital, Mekelle.

There have been mounting political tensions in the country. The TPLF dominated the country’s military and government before Ahmed took office in 2018. His subsequent formation of a new Prosperity Party saw members of the TPLF removed from critical positions.

Despite comprising only 6 per cent of Ethiopia’s population, Tigrayans have historically carried a significant proportion of federal power since leading the way to victory during the 1974 to 1991 civil war. They have recently protested their marginalisation and alienation by Ahmed’s administration.

Tensions reached a peak when the TPLF criticised Ahmed’s decision to postpone the nationwide August 2020 elections indefinitely because of Covid-19. In an act of defiance, Tigrayan leaders recalled their federal representatives from Addis Ababa and held their own elections.

The rhetoric escalated as Ahmed condemned the elections as 'illegitimate' while Tigray media outlets have called the government a 'personalistic dictatorship'.

As historians of conflict and popular insurgency, including the Ethiopian Civil War, we argue that this is no trivial political dispute. Ethiopia is a transethnic federation, meaning it is a centralised state made up of a network of decentralised ethnic-based administrations. These are in regular competition for influence.

The TPLF wants to prevent Ahmed from replacing the federal arrangement with a unitary government, in which they would not play a critical part.

There is a real possibility that an all-out civil war could begin and spill over into the rest of the country. History shows that there is a capacity for widespread mobilisation within the Tigrayan community. The Tigray state is also at Ethiopia’s border with Eritrea and so its military has considerable conflict experience. It’s estimated that the Front’s paramilitary force and local militia number some 250,000 troops.

In addition, there has been recent violent dissent among other ethnic groups in Ethiopia. This includes the Oromos, the Prime Minister’s own ethnic group. Friction has also remained along the border with Eritrea.

If Tigray continues to engage with government forces, it could encourage other dissenting groups to do the same and potentially draw neighbouring states into the conflict.

There have been international calls for de-escalation and peaceful resolution. But Ahmed has vowed to continue with military and political action.

The TPLF has a significant history of popular mobilisation. The Tigrayan State has also maintained its own well-trained militia since the end of the civil war in 1991. And it has a history of fighting for democracy and representation.

When Emperor Haile Selassie was deposed by the army in 1974, the Soviet-supported military junta – the Derg – imposed a repressive ruling regime. In Tigray, an extraordinary resistance emerged in the form of a highly organised and politically mature people’s revolution.

Tens of thousands of men, women and students were mobilised for combat. Schools and other education centres were set up in protected areas and unprecedented land reforms were introduced across the region. This meant that the movement was rooted in the needs of the people.

As the populist revolution began to take ground, the Tigray People’s Liberation Front formed a coalition with other liberation groups called the Ethiopian People’s Revolutionary Democratic Front. Victory against the Derg was secured in 1991.

The front was a progressive alliance, uniting a deeply divided country into a nation. This should be understood in the context of a long history of ethnic-based disputes which caused enormous disruption and loss of life.

A founding principle of the new federal state set out in the 1995 constitution was Article 39, which stipulated that every region had the right to self-determination and, should they desire, peaceful secession.

Today, the TPLF is drawing on this clause as evidence of its democratic right to hold independent elections and dictate regional policy. Meanwhile, the central government has accused the northern state of attempting to divide and weaken the country.

Despite hopes for peace and development under a unitary government, enduring issues of ethnic conflict and division – based on imbalanced political representation – make clear the dangers of a federation.

The ascent of Ahmed in 2018 brought grand hopes of reform. The reality, however, threatens once again to disappoint millions of Ethiopians who placed their trust in their leaders.

As political and military actions escalate, there is an immediate need for de-escalation and dialogue to promote peaceful resolution. If Tigray wishes to consider its right to secede, this must be reviewed through the democratic processes in place for such an event in order to protect the stability of Ethiopia and the region and to prevent a further descent into war.