State should not relent on war to end graft 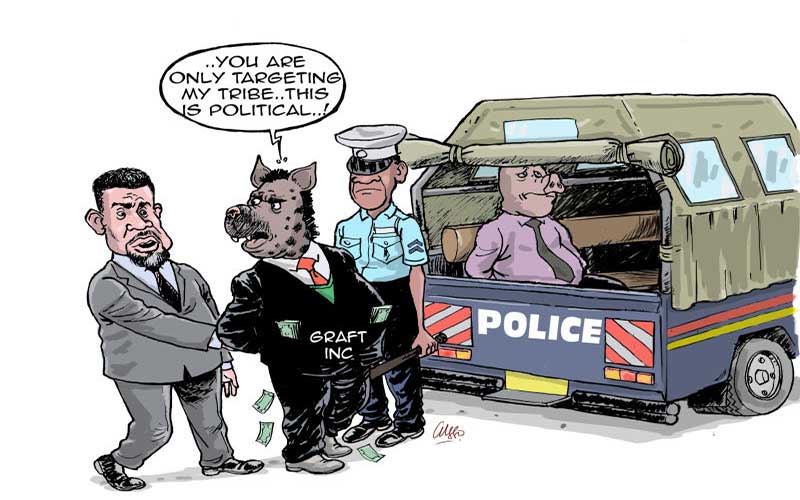 A new phase of the anti-corruption campaign is currently in the works, with the recent changes in National Assembly leadership and the looming cabinet reshuffling. While some at first did not understand why President Uhuru Kenyatta was firing so many people around him, the reasons and details have finally emerged.

The president is unwilling to let anyone in his close circle put him off track from reaching the development goals he promised in 2013 and 2017. Chief amongst them is the Big Four Agenda, which has been his overarching scheme to push Kenyan prosperity and help us reach the status of middle income country by the end of the decade.

Anyone who is in a position of power but is not using that power for the greater good has to go. It is that simple.

Anyone who is working to achieve those development goals, rather than using their power for corruption and personal benefit, will stay.

This is just one of many appalling misdeeds carried out at the hands of the people who were elected to serve us. And Cabinet Secretaries are not the only ones responsible. Recent reports have indicated that some Senators are responsible for awarding state tenders under fishy circumstances, or using work related stipends for personal benefits.

The first step to clean the whole bunch is to weed out the rotten apples. Next is more oversight of what politicians are doing and how they are spending our money.

Some behave as if the state coffers have unlimited gold, as if the well will never run dry no matter what they steal.

But if corruption is so widespread, if so many people are doing it, we will eventually go bust. With the success of Uhuru’s anti-corruption campaign, we need to work on shifting Kenya from a country that relies on foreign aid to one that is more inclined to giving it.

While corruption is widespread in Africa, it even occurs in richer countries like the United States. However, it is particularly pervasive in Kenya since it takes place at all levels of society. In the US, well-connected officials in government may be involved in shady business, but it is unlikely that a parent would bribe a school principal to secure their child a spot.

We just have to make it stop, and the best way forward is through Uhuru’s cabinet reshuffling and firing of politicians who fail to champion the government’s agenda.

How could anyone in Kenya, let alone a leader with a good understanding of public policy, act against the Big Four Agenda? It just does not make sense.

The only logical explanation is that they are privately benefitting on the backs of the public. The people who really deserve to benefit from Uhuru’s development agenda are those putting in the tough labour - the farmers tilling the soil in order to feed securely our nation of almost 50 million people, the women that sew Kenyan fabrics every day in factories to produce locally made clothes, the men who are working in the ports in Mombasa to manage the shipment of goods in and outside of Kenya.

Sometimes as a regular citizen, I almost forget that the elected officials are chosen to serve us, and not the other way around. We are the ones providing the labour and earning the money, while they manage it.

There must be some level of trust between citizens and its government. And I sincerely believe that the best way to develop trust, that elusive and precarious bond, is by showing the public tangible examples of how the government works for its people.

That begins with weeding out those that are walking backwards, taking money from us rather than making money for us. Even if something is in our way - such as a global health crisis - we have to keep on walking forward. All of the reshuffling is essentially that. If something is in our way - in Uhuru’s way - it has to be removed before we can take the next step forward.

Mr Kihoro is a research and data expert. [email protected]

Some 52 cases were reported in Nairobi, with eight from Kibra.