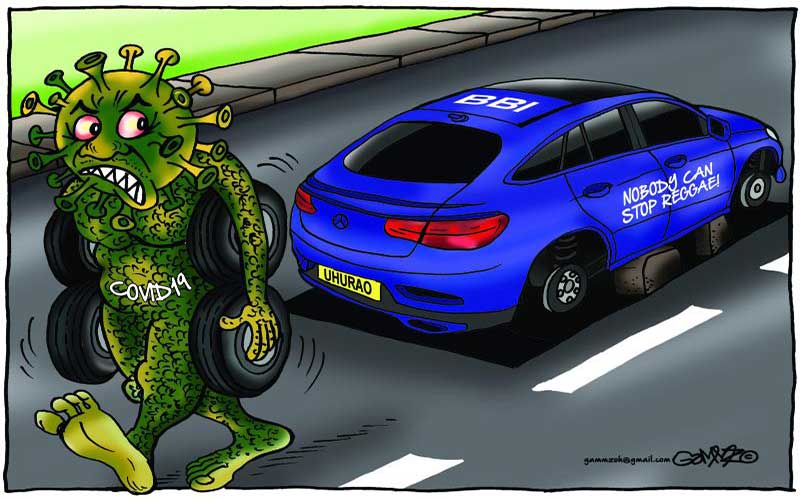 Kenya, like many other countries in the world, is currently facing an existential threat posed by the raging Covid-19 pandemic. This novel disease has brought with it unprecedented social and economic upheaval in Kenya with the majority of the population being forced to retreat to the supposed safety of their homes.

There are over 120 confirmed Covid-19 cases in Kenya and still counting. The government has, so far, been relatively proactive in responding to the crisis. It has established a code of conduct for citizens geared towards checking the spread of the virulent virus. The directives by the government can be classified largely into two categories: Those that define human interactions and the desired behaviour in the society and those that require legislative approvals to win the war on the corona pandemic.

Under the guidelines on human interactions, citizens have been constantly advised to observe social distancing, wash hands regularly with soap, use sanitisers, avoid crowds and stay at home, among others.

Secondly, the government has come up with a raft of legislative proposals touching on taxation aimed at making life bearable especially for the low-income earners in the society. For these government initiatives to bear fruit, there is need for mutual collaboration between the executive and the political class.

The good, bad and ugly of a pandemic year

Our social structure is characterised by the presence of both elected leaders of different cadres and societal or community leaders equally important in their respective spheres of influence. We must tap into this array of leadership resources to communicate the correct message to the people at the grassroots about the Covid-19 phenomenon and what it portends for all of us.

Patriotism to the nation dictates that all political leaders, irrespective of individual political persuasion, should close ranks and face this calamity with a singular purpose. It is not the time for scoring cheap political points. It is an inherent duty of every political leader to promote public interest. And there can be no greater public interest at present than defeating the Covid-19 threat.

How then can our leaders help the government deal with the corona pandemic? Since the management of Covid-19 requires that we limit physical human interactions, the media becomes the ideal tool for our leaders to exploit in educating the populace.

The use of community radio especially in remote rural areas can bring about the desired maximum benefits in this regard.

Equally, leaders can responsibly exploit social media platforms such as Facebook, Whatsapp and twitter, among others, to reach out to the massive youthful population who are active in such forums.

This crisis presents a unique opportunity for leaders to pursue a bi-partisan approach especially in Parliament when processing legislation on the proposed tax reliefs and other measures aimed at lowering the cost of living for the common man in the face of the present calamity. Other countries have shown the way.

For example, in the US Congress, both Republicans and Democrats were largely united in passing a two trillion-dollar coronavirus economic rescue Bill in record time; in Israel, the Covid-19 crisis has compelled Prime Minister Benjamin Netanyahu’s Likud Party and the opposing Blue and White-led coalition of parties to fast track negotiations towards the formation of government that had been elusive for many months; and, closer home, in South Africa the hostility between the ruling Africa National Congress, ANC, and the combined opposition of Democratic Alliance, DA, and Economic Freedom Fighters, EFF, has been put aside as the country rallies behind President Cyril Ramaphosa in managing the Covid-19 crisis.

And in the pursuit of this common good, I must hasten to add that the people themselves have to be reminded that they need to remain extra vigilant and keep their leaders on toes. If there was a time that all our leaders needed to be held to account, it is now.

-The writer is MP for Ugunja and chairs the Public Accounts Committee in the National Assembly and is also ODM Secretary for Political Affairs. The views here are personal.

By Ethiopian Embassy | 18 days ago