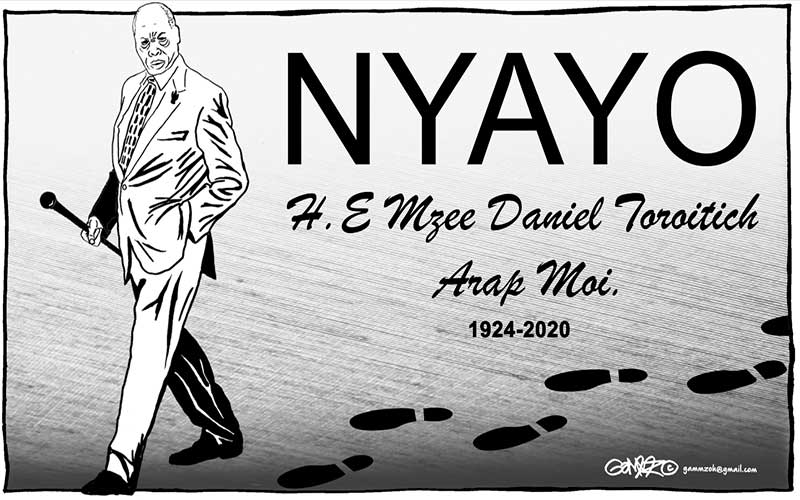 Jon Quincy Adams, the Sixth President of the United States once said if your actions inspire others to dream more, learn more, do more and become more, you are a true leader.

In his estimation, a leader instills in his people hope and belief in themselves, while empowering them to achieve great feats at individual, family and national levels. A true leader can zig while others zag but will keep eye on the prize.

Famed author Rasheed Ogunlaru captures it all with his famous quote: “In leadership, life and all things, it’s far wiser to judge people by their deeds than their speech - their track record rather than their talk”.  Their view of leadership, in many ways, speaks to late former President Daniel Moi’s resolve and personal commitment to the Kenyan dream that defined his 24-year rule as Kenya’s second chief executive. Love him or hate him, Moi, in a big way, touched the hearts of the masses.

This week, the world witnessed as Kenyans turned up in their thousands to bid farewell to the ‘professor of politics’. His death united Kenyans in a rare scale, affirming that indeed, the late politician, even in death, largely symbolised national unity.

Moi cleverly pooled the key leadership qualities of honesty, self-confidence, personal discipline, commitment, positive attitude, determination, creativity and the ability to inspire. His brand of politics was mostly issue-based devoid of name-calling yet his towering personality only added to his wit and ability to rally people for a cause.

I believe the best way to honour him now is to build bridges across ethnicity, religions, social classes and regions while being fully cognizant of the collective aspirations of Kenyans. The political elite should henceforth espouse wananchi’s values and guard them jealously more than ever.

Ask any Kenyan on the streets today about what ails his beloved country, he would tell you they are political exclusion, tribalism, graft, election-related chaos and impunity in high places. Truth is, sideshows and political scheming will not solve these problems but will instead lead to one crisis after another.

If we can set aside our differences and interests to embrace one another by minding each other’s welfare the way Moi wanted it to be, it will be a turning point for Kenya. Sometimes we win wars just because of collective strength. The only way to make a difference is to stand for something special, such as putting the country’s interests first.

No administration is perfect. Rights abuses that may have occurred such as the Wagalla Massacre, will need to be addressed going forward through implementation of the truth Justice and Reconciliation Report to help those affected find closure. As a nation, we have to forge harmony and unity of purpose.

There can never pretense about the challenges we as a nation have endured and which we now hope could be addressed via the Building Bridges Initiative process — a product of President Uhuru Kenyatta and Opposition chief Raila Odinga’s March 9 handshake which DP William Ruto also supports.

Former minister George Saitoti once said there comes a time when the interest of a nation is bigger than that of individuals. A candid conversation devoid of emotions and personal vendetta should begin now. On BBI, let’s be careful not to ruin it by lurching on it to create political confusion.

In honour of the late Moi, let the BBI and any other future initiatives meant to push the national agenda be all-inclusive. The ‘us versus them’ narrative is counterproductive. We all have a role in making Kenya a better place. We can leverage on our past challenges to become the glory we want. Work should start right now.

Step up social safety nets for most needy

Step up social safety nets for most needy

How many new jobs has your governor created?

How many new jobs has your governor created?