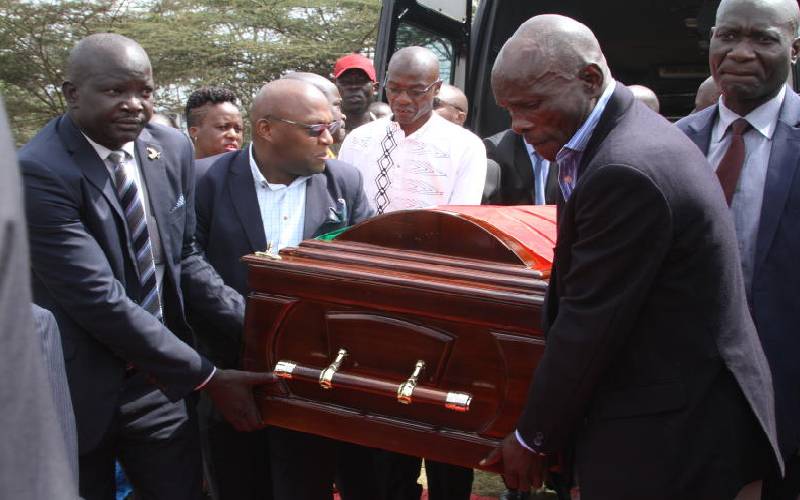 I mean, the audacity of it all. The sheer nerve of the man. I’m struggling to understand how anyone would think it was a good idea to reveal details of a dead man’s indiscretions in the presence of his wife. Leave alone at the man’s memorial service.

When did funeral services become circus grounds? Sorry, that’s a stupid question. They have been for a while. A better one might be this: When did we lose all respect for the dead? And have we no empathy for those they leave behind?

The whole Ken Okoth scenario has me feeling some type of way. No, I don’t have a baby by him, neither did I know him personally, but the drama that surrounded his death and cremation was regrettable and completely unnecessary.

See, he was supposed to be ‘one of the good ones’, one of those who managed to live in a political cesspool without walking around smelling of poop. A role model, servant leader and all the rest of it.

Turns out he was human just like everybody else. Complex. Flawed. Frail. And if some of his colleagues are to be believed, he was also a stereotypical politician. Shrewd. Manipulative. Philandering. At the end of the day, he was just a man. If there’s one thing we should all learn from his demise, it’s that pedestals were not built to carry the weight of mortals.

Are you willing to die for the change you really want?

That said, the former MP’s baby-making escapades are none of our business. We didn’t need to know about that mess. It was not a matter of public interest—just unbelievably crass, and beyond disrespectful.

You might want to argue that the sensational manner in which Okoth’s alleged lover and child were announced to the world was to the benefit of a woman whose son was about to be left out in the cold.

But what about his wife? She’s the woman who committed more than 20 years of her life to him, the one who remained steadfast in that commitment unto death.

Thanks to our resident county crier, we are only just hearing about the other woman, and only because there is notoriety to be had, and money to be made. It’s a classic case really. It shouldn’t even bear mentioning save for the fact that it happens too often and there should be a better way of handling these issues.

In an ideal situation, men and women in monogamous relationships should keep them that way, but we are so far from the ideal at this point that even saying that is a waste of words. Extra-marital entanglements are standard in this society; we all love to party, but we are really crap when it comes to dealing with the hangover.

It makes more sense to squeeze a man for all he’s got while he is still alive, rather than scurrying out of a rat hole when he is dead, asking for money ‘for the sake of your child’.

If you made your bed in the shadows during his lifetime, lay your relationship by his side and bury it in his grave. Because if you were genuinely concerned about your offspring, you would have put your big girl panties on, had the hard conversations and planned for the kids while both parents were still breathing.

Anybody who has a child with anyone they are not married to, whether that person is married or not, needs to think of the future of the child with focus and foresight. You can’t be sitting there waiting for your baby daddy or mama to drop dead so that you can lay claim to their estate.

Yes, I know. It works. Especially if the deceased is well-known and wealthy.

It’s like winning the lottery, right? All you have to do is run to the courts, which will be more than willing to oblige. And the cameras will be right on your tail as well. But again, think ahead.

Years from now when that child you were fighting for grows up, the most enduring legacy from his father will be how his mother behaved when he passed. His version of the story — how you met and the circumstances in which he was conceived — will be filtered through the harsh lens of news reports, tabloids, blogs, comments, cyber bullies and trolls. Talk about trauma.

Also, culture is not a bad thing, we all need a way to connect to the soil. But when it comes down to it, a dead man’s culture is nothing more and nothing less than the summation of his last wishes. To go against those wishes is arrogant, self-indulgent and disrespectful.

By Isaac Kalua | 1 month ago