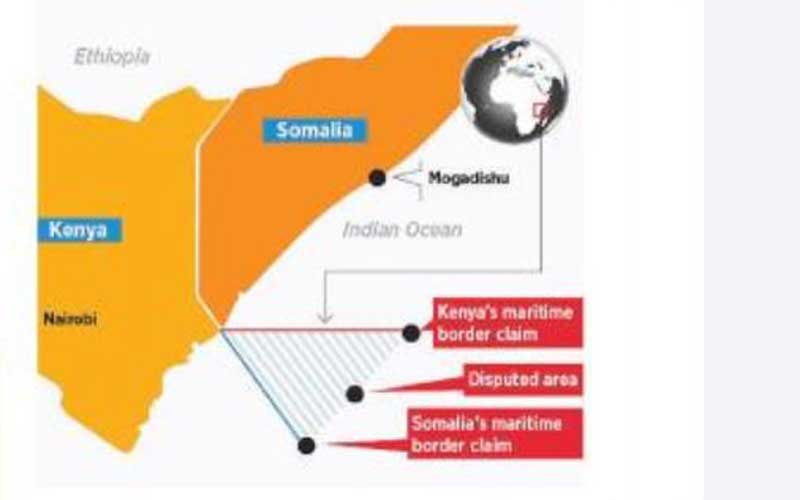 The International Court of Justice (ICJ) will hold public hearings in the case concerning the Maritime Delimitation in the Indian Ocean (Somalia vs. Kenya), from September 9 to 13, 2019 at The Hague. The dispute is about 100,000 square kilometers (62,000 square miles) of a narrow triangle, off the coast of East Africa in the Indian Ocean. Both countries want the area because it has a large deposit of oil and gas.

But for Kenya the boundary is quite clear. It lies parallel to the line of latitude east of Kiunga that gives Kenya the larger share of the maritime area while Somalia, on the other hand, is arguing for a diagonal line down the Kenyan Coast.

The Geneva Conventions on Territorial Sea and Contiguous Zone, High Sea and Continental Shelf as well as the United Nations Conventions on the law of the sea, which came into law in 10 December 1982 and 29 April 1958 respectively, were recognised as universal legal frameworks on the seas. The convention has a number of provisions on the maritime zones recognition such as archipelagic waters, continental shelf, exclusive economic zone, contiguous zone, territorial sea and internal waters which shall be formed by the states along the coast.

The conventions also state the obligations and rights of the states on governing and managing their activities, including preservation and protection of natural resources within the zones. A bilateral MoU was signed by representatives of the parties in Nairobi on April 7, 2009.

The case concerning Maritime Delimitation in the Indian Ocean was an application filed by the Federal Republic of Somalia on August 28, 2014. The application concerns “the establishment of the single maritime boundary between Somalia and Kenya in the Indian Ocean delimiting the territorial sea, exclusive economic zone ('EEZ') and continental shelf, including the continental shelf beyond 200 nautical miles.

Third, to adjudge and declare that Kenya, by its conduct in the disputed area, has violated its international obligations to respect the sovereignty, and sovereign rights and jurisdiction of Somalia. Kenya’s preliminary objection was thrown out by the ICJ and the maritime delimitation case began in earnest.

When all is said and done, who is better placed to take advantage of the oil exploration facilities?” Security expert Andrew Franklin says Somalia and Kenya would be better placed to share resources and work together in gas exploitation. Yet this exploration should not come at the price of security.

While Somalia President Farmajo would find it difficult to agree to an out-of-court settlement due to the upcoming presidential election, external factors including geopolitics and supremacy battles and interests for oil exploration are fueling the maritime dispute. Gulf Arab states and Western powers have made huge investments in the two countries. Somalia and Spectrum Geo have launched a special website entitled “Somalia licensing round” for information about a petroleum-licensing round, including complete timelines to licensing and effective date for production-sharing agreement, petroleum laws (old) and tendered documents, while Kenya is alleged to have already auctioned the blocks in the disputed areas.

The ICJ ruling can only declare one winner and the decision is binding. It is very important for Kenya and Somalia to resort to round-table discussions with a view to agreeing on a common understanding with the ultimate goal of out-of-court settlement.

A number of viable options for diplomacy can be perused, including the AU and Igad. The current situation appears to be at the practical level; an opposition among strategists, historians and lawyers, each of these categories being actually represented at various levels between Kenya and Somalia. The experts agree to disagree also on the kind of paradigms they rely on mostly, and prove that this dispute is neither historical nor exclusively legal, or based on the strategies of the state.

They cannot strictly be confined to the field, although rather significant or geostrategic. They are instead geopolitical, as they combine all those arguments and interpretations which have the ramifications of constraining the possibilities to indulge in comprehensive dialogues among the parties involved.

By Mukurima Muriuki | 9 days ago