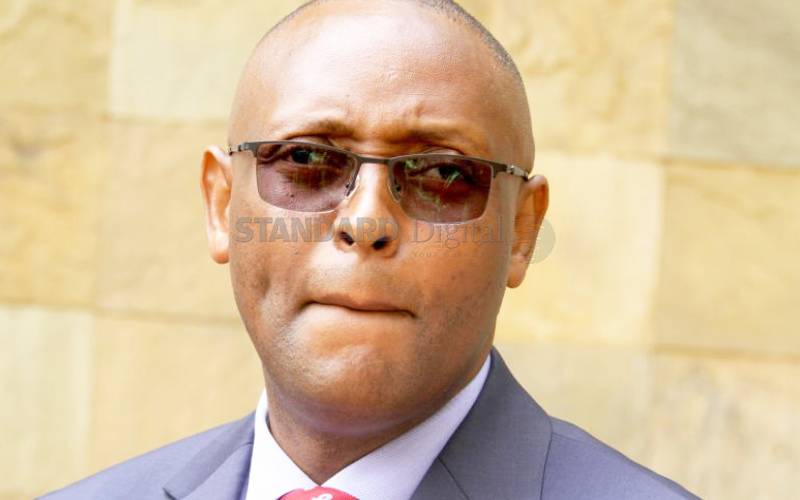 Embattled Taita Taveta Governor Granton Samboja (pictured) will skip Senate hearings, following his impeachment by the county assembly. Mr Samboja, through his lawyer Nelson Havi, on Saturday wrote to Senate Clerk Jeremiah Nyegenye, indicating his decision to snub impeachment proceedings by a select committee chaired by Embu Senator Njeru Ndwiga, citing a court order restraining the process until a case he has filed is determined. The Senate registry received the memorandum from the parties involved after the Taita Taveta assembly impeached the governor.

Speaker Meshack Maghanga forwarded the particulars to his Senate counterpart, Ken Lusaka, for consideration. The Senate registry was opened to 5pm on Saturday, and the clerk confirmed having received correspondence from various parties, including the assembly and citizens of Taita Taveta. “The governor has communicated his decision not to take part in the Senate impeachment proceedings. His lawyer has informed us,” said the clerk. “We have also received impeachment particulars from Mr Maghanga and members of the public.”

Maghanga submitted to the Senate the Assembly’s Order Paper of October 9, 2019, the date when the impeachment was approved. Others documents submitted were the Hansard of the sitting that approved the impeachment motion, with the signatures of the 30 MCAs who voted in support of it.

Senator Ndwiga yesterday said the committee would meet and come up with modalities on how to conduct the hearings, and table a report within 10 days as stipulated in law. “The secretariat is inviting the parties to appear before us. On Tuesday, we will convene as a committee to consider the allegations and come up with a schedule for meetings with the assembly and the governor, witnesses and the people of the county,” he said. Senate Majority Leader Kipchumba Murkomen (Elgeyo Marakwet) and Bungoma Senator Moses Wetangula said the committee would proceed, whether the governor appears or not, arguing that there are other parties, like the assembly, witnesses and members of the public, involved. But Minority Leader James Orengo (Siaya) said in countries like South Africa and Nigeria that have democratic constitutions where the Bill of Rights is key, proceeding with such an impeachment process in the face of a court injunction would be an exercise in futility. Notwithstanding his warning, he admitted he sat in the select committee considering the impeachment of Embu Governor Martin Wambora, yet they had a court injuction and the latter even honoured the invites.

“It is not personal; we are not trying to win or score points,” said Mr Murkomen.

Last Thursday, Samboja got a reprieve when Deputy Speaker Kithure Kindiki (Tharaka Nithi) put a 30-day parliamentary stay order on the committee’s inquiry into the impeachment process in respect of a court order from High Court Justice Weldon Korir. However, the senators implored the Speaker to rescind the decision, arguing that the courts cannot injunct Parliament, especially on time-bound political processes like the impeachment of president, deputy president or governors. Senators Murkomen, Mutula Kilonzo Jnr (Makueni), Mr Wetangula, Aaron Cheruiyot (Kericho), Moses Kajwang’ (Homa Bay) and Ochilo Ayako (Migori) warned that the decision would set a dangerous precedent where parliamentary operations could be paralysed by the courts.