The multi-agency channeled efforts to retrieve the bodies of victims of Likoni ferry tragedy have received a boost after the government acquired more equipment to help in the operations.

The new equipment acquired by the government will be installed today, the officials have announced.

The equipment includes Advanced System Remote Operated Cameras which will be used by the multi-agency team deployed in the ocean.

Kenya navy official who is leading the operations Col. Lawrence Gituma said the new equipment will supplement the others that were being used in the last seven days.

"The strategy now we are deploying relies on the new equipment before sending the human beings for verification down there. The government got us new equipment," he said.

He said the equipment were expected to give better results of the bottom and when sending the experts to the seabed with a surety of what to go for.

The Monday recovery operations were delayed for several hours and by 11 am the divers were still seen offshores assembling their gears.

The delay, according to officials, was caused by the four big ships from Indian Airforce carrying personnel who had arrived in the country for an exercise mission.

"We are late because of the Indian air force who had to put their big four ships in order. They have come for a visit and to do some exercise. However, we are going to embark on our operations anytime soon from now," said Kenya Ferry Services Chairman Dan Mwanzo.

Meanwhile, the expected divers from South Africa who were hired by the family have arrived in the country.

The family has hired a team of divers from Subsea of Subtech Group company in South Africa.

Kenya Ferry Services Chairman Dan Mwanzo said they were waiting for the divers are now scheduled for a press briefing on the way forward. 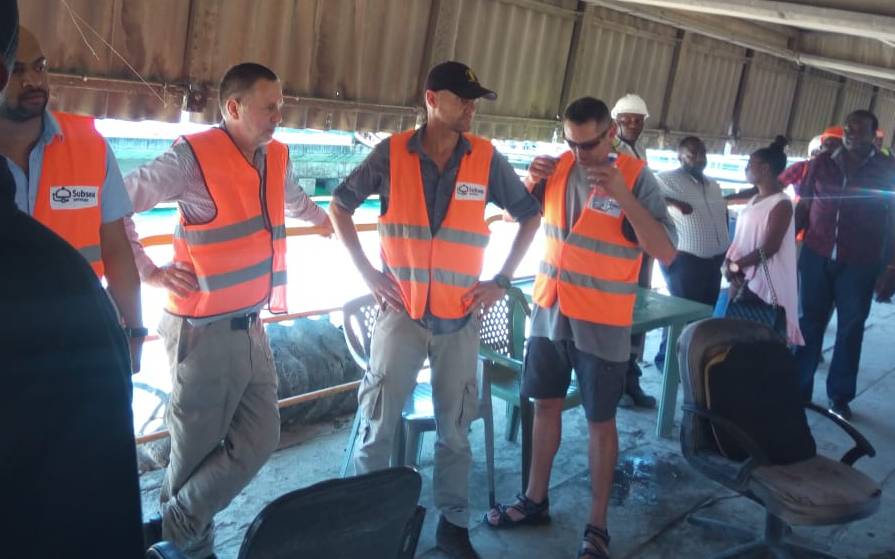 The family received Sh2 million from Mombasa Governor Hassan Joho to help in paying the divers to help in the operations.

On Sunday, the Government Spokesman Retired Col. Cyrus Oguna said the government must exercise caution to ensure that there are no casualties in the process.

As of yesterday, the Kenya Ferry Services revealed in their statement that there were already four locations in the channel earmarked for the search.

The KFS boss Bakari Gowa, however, noted in the statement that what complicates their mission is the unfriendly terrain of the locations, which may endanger the safety of divers.

According to Mr Gowa, the divers cannot take long in the water for their safety.

“Taking into consideration the realities of underwater characteristics and depths involved, the divers cannot stay submerged for more than six minutes. This implies that exhaustive inspection of these four locations may take longer,” the statement read in part.

ODM leader Raila Odinga on Saturday called on the firms conducting dredging activities in the Indian Ocean waters to cease operations to allow the divers to locate the vehicle and the two bodies.

"I want to give an order here that the dredging works stop immediately so that those working here ...divers can work without interference.," he said on Saturday

Raila, who was accompanied by the Likoni Member of Parliament Mishi Mboko and KFS boss Dan Mwazo said that the dredging activity was aggravating invisibility in the ocean and even making locating the bodies and the vehicle more difficult.

The companies nonetheless seem to have defied his calls as they continue with their normal activities.

Odinga’s order triggered outbursts from MPs allied to Deputy President William Ruto, who questioned the authoritativeness of his orders; arguing that he is not part of the government.

The 35-year-old Mariam Kighenda and her four-year-old daughter Amanda Mutheu plunged into the Indian Ocean when their car slipped off MV Harambee ferry on September 29, 2019, in the evening.

Solskjaer can't think past 'next six games' at Man United

By Benard Sanga and Nehemiah Okwembah