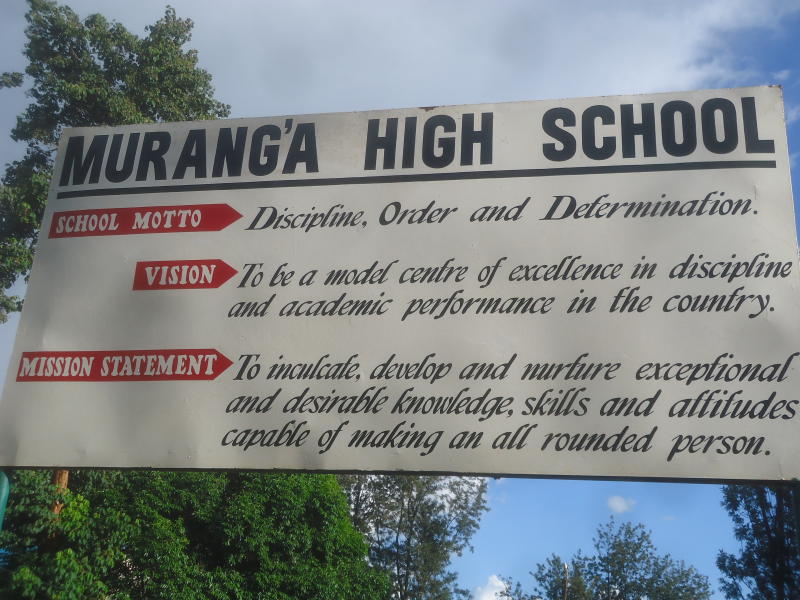 Murang'a High School has appealed the decision of a Murang'a Lands and Environment Court dismissing their petition against Murang'a Water and Sanitation Company (Muwasco) over trespass charges.

The school had filed a petition at the court, accusing the water firm of trespass. It claimed Muwasco staff members illegally connected the sewer from the neighbors surrounding the school to the institution’s sewerage system and bio-digester.

Justice Grace Kemei dismissed the petition, terming it a "mere contractual dispute, which has been given a constitutional facemask".

The judge said the dispute ought to have been filed, heard and determined by a water tribunal for the two parties to exhaust the alternative dispute resolution mechanism.

“There is a trend growing in this country where litigation is giving every dispute a constitutional angle. I must add that in my considered view, this is a mere dispute, which has been given a constitutional face mask. From the foregoing, I down my tools to allow the parties to exhaust the dispute resolution mechanism provided by the State,” the judge ruled.

The school, however, filed an appeal at the same court under Petition 29 of 2020, seeking a temporary injunction restraining Muwasco from trespassing into the school in an attempt to reconnect their sewer line on grounds that the water tribunal does not have a chairperson and therefore was not properly constituted to hear their matter.

However, the Judge refused to certify the matter as urgent as pleaded by the school through its Parents and Teachers Association chairperson Amos Kuria Njoroge and two others and instead slated the inter-parties hearing.

Through frequent letters to school, the water firm has reminded the School that the sewer line was constructed in 2015 by the firm in conjunction with Muranga County Government using public funds to serve the locals and the school.

The water firm through its Managing Director Daniel Ng’ang’a accuses the school of damaging the sewer line by blocking it at the school, leaving raw sewer to run through the farms and making the neighborhood inhabitable.

“The sewer line was constructed using public funds to serve your school and the community in 2015, however on May 6, we received a letter informing us that you have developed a biodigester and you no longer require sewer services requiring us to discontinue offering the services. But we have complaints from your neighborhood that you have destroyed the sewerage infrastructure terming it illegal."

“You are hereby cautioned that you should develop your infrastructure without interfering with the public sewer line and should repair the damaged line with a cost of Sh232,000,” a letter signed by Mr Nganga reads in part.

In a rejoinder, the school wrote  “In 2015, Muranga High School connected to your main sewer at its own cost and has been maintaining the same at our own cost, after two years we realized it was too expensive and we constructed our own line but on May 13, you attempted to connect private developers to our line interfering with our biodigester,” a letter from the school reads in part.

The school filed the petition in court even as Muranga County Director Ann Kiiru sought to mediate the warring parties through the help of the County Commissioner.

On August 7,2020, Ms Kiiru wrote to Muranga Water and Sanitation inviting them for a consultative forum at Muranga High School.

“While the school complains of the illegal sewer connection, Muwasco complains of malicious damage of a public sewerage line passing through the school. After consultations with the County Commissioner, it has been agreed that the parties come together for an amicable solution,” the letter reads in part. ?

Cash will help the operator expand its data centre in five countries including Egypt and Nigeria.