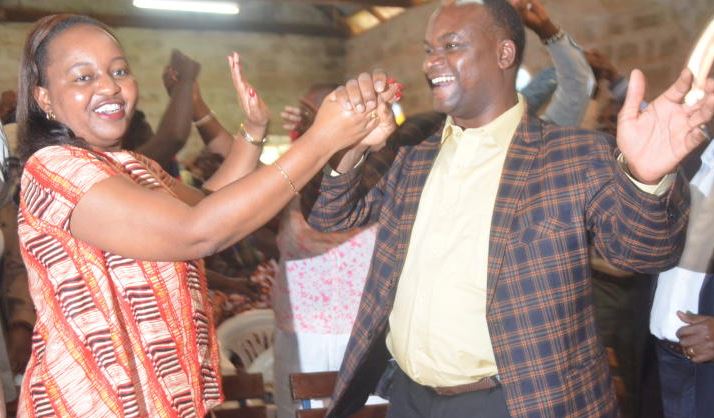 In the run-up to the 2017 General Election and for a while after they won, Kirinyaga Governor Anne Waiguru and her deputy Peter Ndambiri (both pictured) were the perfect political match.

They appeared together in nearly all public engagements and left no doubt that were in sync after winning an overwhelming majority in a hotly contested poll whose line-up included Narc-Kenya leader Martha Karua and the incumbent, Joseph Ndathi.

Whenever Ms Waiguru was away, Mr Ndambiri would fill the void and represent her in county functions.

The soft-spoken deputy rarely contradicted his boss and was always wary of responding to queries that would put him at loggerheads with Waiguru.

On her part, Waiguru was careful not to cast her deputy in bad light, always sending the signal that Ndambiri was an able assistant in helping her realise her aspirations for the county under the clarion call, ‘Kirinyaga rising’.

Three years down the line, however, the relationship between the governor and her deputy is visibly strained.

Daggers seem to have been drawn, and supporters of the two are not hiding the fact that there is no love lost between them as the clock ticks towards 2022.

Recent happenings in the agriculture-rich county point to a souring relationship between Waiguru and Ndambiri.

According to those close enough to the two to analyse the changes in their working relationship, things came to a head when an impeachment motion against Waiguru was filed at the Kirinyaga County Assembly.

Immediately after the motion, filed by Mutira MCA David Kinyua, Waiguru’s supporters saw Ndambiri’s hand in it, an allegation he denied.

Ndambiri called a press conference to defend himself against the accusation that he was behind the intended ouster of his boss. He then reiterated that his name would be on the ballot for the governor post in 2022.

Speaking to the press at Kanjinji area in Mwea East Sub-county immediately after the allegations surfaced, Ndambiri accused unknown people of misleading the governor that he was the force behind the ouster motion, which is set for debate when the Assembly resumes next month.

Supporters of the impeachment motion accuse Waiguru of gross violation of the Constitution, abuse of office and gross misconduct.

The governor has denied the allegations levelled against her, dismissing the ouster attempt as political. She obtained an injunction stopping the impeachment proceedings, citing the Covid-19 pandemic.

In his defence, Ndambiri said the assembly is an independent body over which he had no control. He said those lying to the governor were looking to taint his image and destroy the cordial relationship he has with his boss.

“I have neither financed nor met them (MCAs behind the impeachment),” said Ndambiri.

He added that he had been absent in “two or three county functions” presided over by the governor chiefly because he had not been informed of them.

“However, I’m still discharging my duties as deputy governor. I’m meeting people from various parts of the county and officially consulting with ministers and other officials. We will politic when that time comes in 2022 when I will vie for the governor position,” he said.

Waiguru did not respond to our requests for comment, but at a recent function in Sagana township, she said she was aware of “saboteurs” in her government.

This was after a cross section of the public asked to know where the deputy governor was and why he was no longer accompanying the governor to functions.

“Mucemi akorire mukungi (The sly will meet their match),” she said, indirectly indicating that she was ready for her political rivals.

Waiguru seems to have also fallen out with Interior Principal Secretary Karanja Kibicho, a native of the county, over the Sh15 billion Kenya Medical Research Institute (Kemri) project backed by the PS.

Matters have not been made any easier by area MPs appearing to distance themselves from Waiguru.

Early this month, the MPs asked Jubilee Secretary General Raphael Tuju and State operatives to stop interfering in the impeachment motion against Waiguru.

Wangui Ngirichi (Woman Rep), John Wambugu (Kirinyaga Central), Gichimu Githinji (Gichugu) and George Kariuki (Ndia) said the impeachment should proceed as per the law, arguing that the governor is presumed innocent until proved guilty by the county assembly, the Senate or the courts.

And on Saturday, a voters’ lobby group in Kirinyaga issued a week’s ultimatum to Waiguru and Ndambiri to reconcile, failure to which it would petition President Uhuru Kenyatta to dissolve the county.

“As far as the 2017 majority verdict informs, Waiguru and Ndambiri are political Siamese twins that can only be separated formally either by expiry of their term in 2022, or through the courts,” Mr Kinyua said.

But police officers in the county have warned that if the political fallout between the two leaders’ supporters spills over into cases of lawlessness, neither camp would be spared.

“We have arrested two groups in the past two weeks. One group was staging an unlawful protest, while the other was holding an illegal gathering in a hotel in Mwea,” said Mwea East Police Commander John Onditi.

Yesterday, Ndambiri told The Standard he was ready to reconcile with Waiguru.

“I want to assure our people that I’m seeking avenues to thrash out this misunderstanding. I also know the governor is looking into the issue,” he said.

Education loan application has now been opened for about 300,000 students in universities and colleges.

By Muriithi Mugo | 18 hours ago