Moses Kuria’s anger after his bill board is pulled down 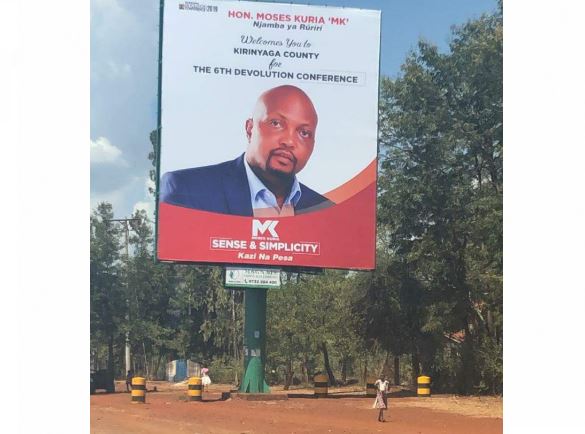 Gatundu South MP Moses Kuria is livid after a billboard was pulled down.

The billboard features Kuria welcoming visitors to the 6th Devolution Conference held in Kirinyaga County and was erected on March 1.

When travelling to Murang'a to attend the burial of Margaret Wangechi Irungu, mother to Murang'a Senator Irungu Kang'ata, Kuria learnt the billboard that was erected near a Del Monte shop was destroyed on Sunday morning.

Speaking at St Joseph the Worker Catholic Church where the funeral mass was was held, Kuria said the billboard will be replaced and guarded.

He said billboards placed in other parts of Kiambu and Nyeri counties are intact.

"It is a planned move. How can only the billboard at Del Monte area in Murang'a County was pulled down," said Kuria who has declared to vie for Presidency in 2022.

He said he has reported the incident to the agency he contracted to place the billboard.

"I left it to Magnate to report to the police as I make arrangements for its replacement," he said.

By Timothy Kariuki | 6 hours ago