The United Nations Security Council will hold an emergency meeting today to discuss North Korea's test firing of a ballistic missile over Japan.

The open meeting was requested by the United States. "We must limit the DPRK's ability to advance its unlawful ballistic missile and weapons of mass destruction programs," Linda Thomas-Greenfield, the U.S. ambassador to the United Nations, tweeted.

Hirokazu Matsuno, Japan's chief Cabinet secretary, told reporters earlier Tuesday the North Korean missile was launched at 7:22 a.m. and splashed into the Pacific Ocean outside Japan's exclusive economic zone 22 minutes later. It prompted Tokyo to evacuate some residents in the northern prefectures of Hokkaido and Aomori on Tuesday morning.

U.S. and South Korean military forces fired a volley of missiles into the sea early Wednesday and staged a bombing drill in the Yellow Sea in response to the North Korean missile launch.

South Korea's JCS said it fired four Army Tactical Missile Systems and a Hyumoo-2 ballistic missile. A second short-range Hyumoo-2 malfunctioned and crashed into the ground on the air force base on the outskirts of Gangneung. No injuries were reported, and an investigation into the cause of the malfunction has begun.

The crash rattled the coastal city's residents who feared it could be a North Korean attack. The South Korean military acknowledged the crash hours later. 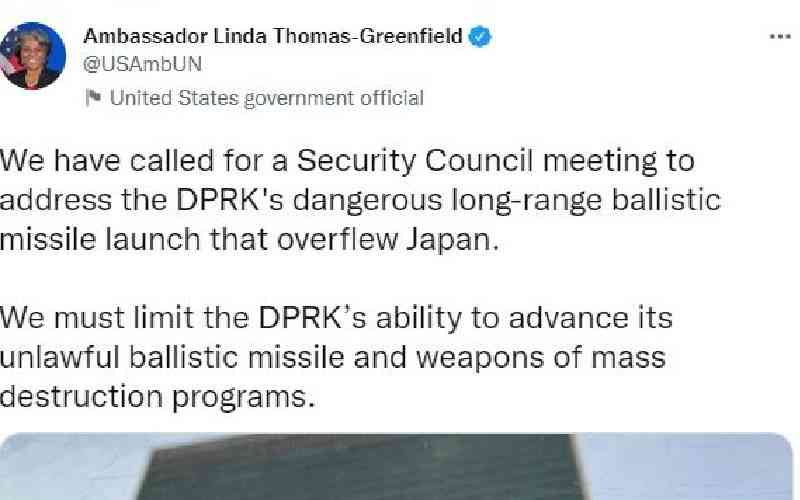 "The leaders jointly condemned the DPRK's (North Korea's) missile test in the strongest terms, recognizing the launch as a danger to the Japanese people, destabilizing to the region, and a clear violation of United Nations Security Council resolutions," the statement said. It added that Biden reinforced the administration's "ironclad" commitment to Japan's defense.

Japan's Defense Minister Yasukazu Hamada said the missile flew over Japan for about one minute, soaring further than previous intermediate-range missiles, estimated at 4,600 kilometers, before landing in waters some 3,200 kilometers east of Japan.

That the missile was shot over Japanese territory takes the escalatory mood in the region even higher, a decision Adrienne Watson, the U.S. National Security Council spokesperson, in a statement Tuesday, described as "dangerous and reckless" and shows North Korea's "blatant disregard for United Nations Security Council resolutions and international safety norms."

North Korea had last tested a Hwasong-12 IRBM in late January of this year, after which its state media explained its lofted trajectory as intentional, done "in consideration of the security of neighboring countries" — in an apparent reference to Japan. That missile was estimated to have a range capable of putting Guam within reach.

The latest ballistic missile launch is likely to exceed that range. Some 3,400 kilometres separate Pyongyang and Guam, which houses a U.S. strategic naval base.

Hwasong-12 IRBMs were also tested in August and September of 2017, when Japan last issued a call to shelter after missiles flew over Hokkaido.

Tensions have been on the rise on the Korean peninsula in recent days, with Tuesday's launch upping the ante from the short-range ballistic missiles Pyongyang had fired on September 25, 28, 29 and October 1. The fifth test in days follows a major joint naval exercise between the U.S. and South Korea featuring the nuclear-powered USS Ronald Reagan supercarrier, which resumed for the first time in five years.

South Korea's JCS says the USS Ronald Reagan will return to the waters east of the country Wednesday as a show of the allies' readiness to counter Pyongyang's provocations and threats.

A trilateral anti-submarine military exercise with Japan was also conducted for the first time since 2017 off South Korea's coast.

A return to nuclear testing also remains a strong possibility. South Korea's spy agency last week told lawmakers a seventh nuclear test, should it materialize, would most likely fall between October 16 — the first day of China's National Congress of the Communist Party — and November 8, the U.S. midterm elections.

South Korean President Yoon Suk Yeol at an Armed Forces Day ceremony on Saturday warned North Korea against any nuclear provocations, saying a "resolute and overwhelming" response would be ready from the allies should it decide to use nuclear weapons.

Next article
Is Joshua Oigara the next Stanbic Bank Kenya CEO?