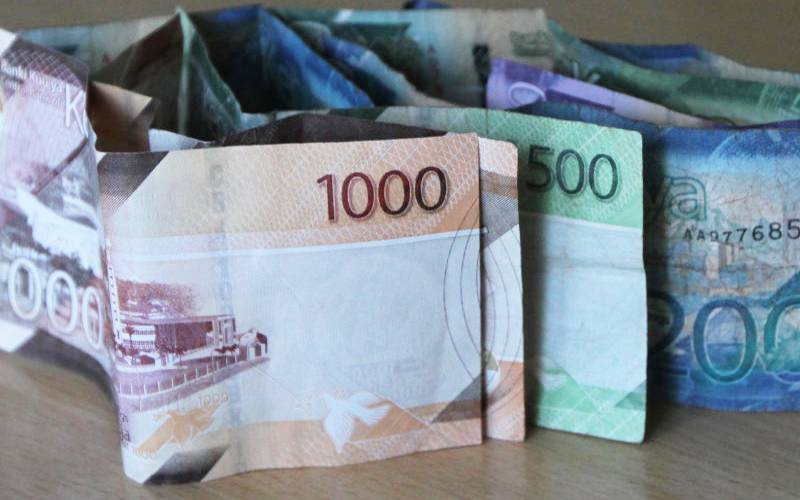 An unusually huge demand for dollars by banks has been blamed for the recent weakening of the shilling, which exchanged at a record low of Sh108 against the greenback by end of trading in Friday.

In its weekly bulletin, the Central Bank of Kenya (CBK) said the local currency weakened against major international and regional currencies during the week ending July 23, “on account of increased demand for dollars in the interbank market.”

Analysts cited a number of factors, including panic-buying of the dollar, the world’s reserve of foreign exchange, for the slide.

By end of trading yesterday, the shilling had gained some ground against the dollar to trade at an average of Sh107.78, CBK data shows.

The interbank market is a platform in which banks extend loans to one another for a specified term. Most interbank loans are for maturities of one week or less, the majority being overnight.

Vinitia Kotedia, an analyst at EFG Hermes, a financial service provider attributed the increase in dollar demand last week to the surge in economic activities in the country.

“Import demand is picking up as the economy opens up, which we believe is the main reason for weakness in the shilling’s weakness lately,” said Kotedia.

Ms Kotedia also cited an increase in demand for dollars from some corporates that are due to make dividend payments for the sag in the Shilling.

Additionally, domestic Treasury bill rates have been low, which has increased liquidity levels in the market, leading to the weakening of the local currency.  Interest rate on the 91-day Treasury Bill, a short term government security, dropped to a seven-year at 6.112 per cent last week.

Moreover, heavy inflows of Covid-19 funds from the International Monetary Fund (IMF) and the World Banks, said Kotedia, have since been muted.

In the two months, the country received close to $2 billion (Sh207 billion) from multilateral lenders, which in addition to IMF and World Bank, also include African Development Bank (AfDB) and the European Union.

For the last two months, CBK has remained active in the open market operation. During this period, CBK tried to forestall the slide of the local currency by being on standby to sell foreign currencies in what is aimed at stabilising the exchange rate.

During the week, the usable foreign exchange reserves stood at $9,421 million (Sh1 trillion) which CBK said is adequate to cover the country’s import needs for the next 5.72 months.

However, this was a drop of Sh26.7 billion from $9,669 million in the precious week ending July16, an indicator that CBK was actively selling dollars to commercial banks to firm up the exchange rate.

KCB Capital, an investment firm, noted in its weekly report that they expect the forex reserves to “continue to present an adequate cushion for the local unit in the short term,” though end month dollar demand is expected to exert pressure on the currency in the coming week.”

Reuters said last week that market players from broad sectors of the economy were shoring up their dollar reserves after the shilling weakened to an all-time record low during the previous session, traders said.

“After Wednesday’s erratic move, there is some sort of panic buying in the market...buyers from all sectors,” the news agency quoted a trader from one commercial bank.

Between February and May, the money in foreign currency deposit increased by Sh60.1 billion to hit a record high of Sh671.4 billion as investors sought safe haven for their wealth.

In March, foreign cash in local banks increased by 2.6 per cent to Sh642.1 billion before in increased further to Sh657.3 billion in April.

However, once in a while, the regulator gets into steps in to “even out extreme and undesirable fluctuations in the shilling’s trading rate.”

“Such volatilities may occur due to speculative activities in the market or when the market is not able to clear seasonal upsurges on either demand or supply,” says CBK on its website.

Alas! The age of vertical ghettos is truly upon Kenya

We copied the American constitution with their governors and senators. Are we about to copy their ghettos?