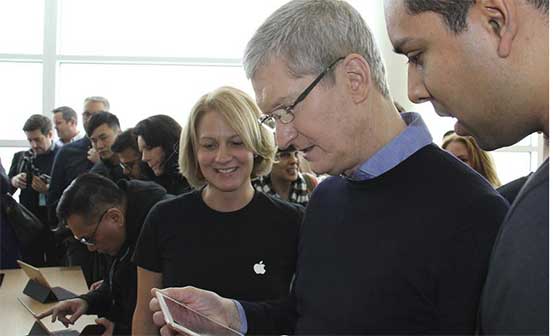 Apple Inc. on Monday unveiled a new smartphone and a new tablet both having smaller screens in its efforts to retool its product lineup of iPhones and iPads.

At an event held at its headquarters in Cupertino, California, the Silicon Valley technology company also announced a series of upgrades to its hardware products, including Apple TV and Apple Watch, and software services, such as iOS.

The new phone, named iPhone SE, has a 4-inch screen, same as the iPhone 5 series initially released in 2012 and smaller than the iPhone 6 series rolled out about a year ago. IPhone 6 and 6s have 4.7-inch screens, and iPhone 6 Plus and 6s Plus have 5.5-inch screens.

Greg Joswiak, head of iPhone marketing, explained that Apple has witnessed that its 4-inch devices still have a huge market, and therefore has packed into iPhone SE functionalities as powerful as those in iPhone 6s.

The new tablet computer, a new iPad Pro, is a 9.7-inch device, down from the 12.9 inches introduced at the autumn product launch last year.

Apple has positioned iPad Pro as a replacement for laptop computers. However, with the Apple product's high price tag, the strategy aims mostly at professionals.

Compared with previous spring product launches, the event on Monday lasted about an hour and seemed to be less of a "sensation," both on the scene among Apple officials and out at large among industry analysts.

Chief Executive Officer Tim Cook took the chance to talk about his company's dispute with the U.S. government. "We believe strongly that we have a responsibility to help you protect your data and protect your privacy," he said.

He was referring to the U.S. Department of Justice's request for Apple to help hack into an iPhone 5c used by Syed Farook, who together with his wife Tashfeen Malik shot dead 14 people on Dec. 2 last year in San Bernardino, California, before being killed by police.

A federal judge sided with the government on Feb. 16 and ordered Apple to provide specialized software to the Federal Bureau of Investigation (FBI) for investigation into the San Bernardino carnage.

Apple has refused. Cook has been vocal defending the company's position.

The two sides are scheduled to appear at a hearing on March 22, a day after the spring launch, before Judge Sheri Pym, of U.S. District Court, Central California.

Unaitas Sacco has recorded a 65.5 percent growth in profit after tax for the financial year ended 31st December 2015 riding high on an increased loan portfolio growth against backdrop of a tough financial year.

By Vivianne Wandera | 24 days ago