A gem in the dust bowls of Kenya's Amboseli 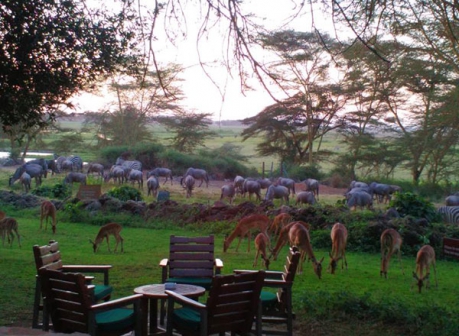 It has been years since I last visited Amboseli, the great wildlife paradise 250 kilometres South of Nairobi. Some things have not changed here, though.

Amboseli still lives up to its reputation as the “salty dust” as the local Maasai term it. From whatever direction you come, a thin layer of fine, white dust will welcome you. It will get into your vehicle regardless of how well wound up your windows are.

The elephants are still in plenty. It is only in Amboseli where you can count a single herd comprising 50 elephants or more. It is the large number of elephants that brings visitors here from around the globe. The Amboseli herds are among the most studied, perhaps due to their (almost) friendly nature. Having seen countless number of tour vehicles, they seem unbothered by clicking cameras a few metres from their feeding grounds.

Then there are things that have changed. The effects of climate change are all evident here. You just have to look at Mout Kilimanjaro that looms large just cross the border in Tanzania.

Kilimanjaro is one of the most recognisable landmarks on earth. The snows of the only free standing massif in the world – snows that became the stuff of legends in much of Europe in the mid-1800s continue to disappear at an alarming rate.

Regardless of what is in and what is not, Amboseli is a wild wonder of sorts. Nature lovers will still enjoy the bountiful wildlife that thrives around the scattered forests, open plains, even the dried up Lake Amboseli.

The last time I visited Amboseli, I camped on an open ground not far from Amboseli Serena Safari Lodge, only visiting the world-famous lodge in the evening for a drink.

There is usually little to write home about if your camping experience consists of one of those flimsy dome tents that can hardly withstand the heavy breath of an elephant. This time, though, things were different.

For two days, the lodge made the perfect base for my exploratory trip. I had arrived here on a Tuesday afternoon. Some refreshing orange juice and an equally cool facial towel set me on a holiday mood, notwithstanding that I had another mission — checking out the newfound love of farming by the local Maasai.

Built in 1973, the lodge’s entire décor reflects the brilliant red colours and iconic shapes of the legendary tribe. Each of the 96 rooms is housed in a single storey building with back doors opening directly on o the lush grounds.

Inside the rooms, too, the Maasai manyatta theme runs through, from the spears hooked to the doors to the hand-painted wall murals. Even the light fixtures have not escaped the Maasai onslaught.

At the heart of the lodge, shaded by palm trees, is a swimming pool, a welcome sight to the otherwise hot and vindictive landscape. The central dining area is reached by a timbered bridge over a water stream.

The lounge and bar feature a broad terrace with yet another elaborate Maasai beadwork donning a good portion of the wall next to the bar. Hanging on the ceiling are dozens of gourds, similar to those used by the local community for milk storage.

The blazing fire-pit became my haunt of sorts for the two evenings.

It is here that Kathurima Mburugu, the affable lodge manager regaled me with his tales of running a number of Serena outfits scattered across East Africa.

“With 96 rooms, Amboseli Serena is one the largest game lodges in the region,” he tells me. “It is an oasis in the parched land.” True, below the main dining area is an open ground that becomes a theatre of sorts as wild animals jostle for a vantage point at a watering hole fed by the melting glaciers of Kilimanjaro.

One morning, I ventured out of the park to visit local Maasai shambas where the community is taking up farming with enthusiasm.

The farms, Kathurima told me, are the main suppliers of food consumed in the lodge.

Majestic Tim, the Amboseli elephant with super tasks to be immortalised

How to get the most out of small spaces

Bernard Angwenyi, an engineer and a father of two, remembers how worried he was two years ago after acquiring a 25-by-70 feet plot of land in Saika in Nairobi.

By Thomson Reuters Foundation | 4 days ago