Cheaper building options you could consider 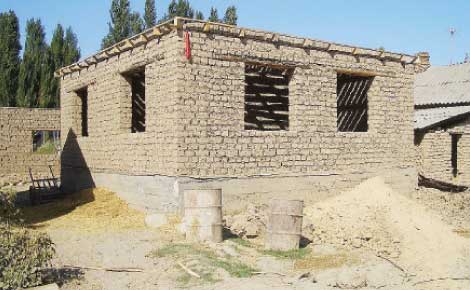 Building experts say that with the cost of land and building materials ever-rising and developers only targeting the high-end market, potential homeowners should go the unconventional way when looking for solutions, writes PAUL KARIUKI

The popular quarry bricks and mortar with machine-made, kiln-hardened clay bricks method of building may just have found its match.

In the new method, bricks are broad compared to quarried ones and are placed one upon another without any need of binding mortar, something that is helping builders cut down on construction costs.  The bricks are arranged in such away that there is no room for creating lines of weakness.

Architects say that if this new trend becomes prevalent in the construction industry, houses would take a shorter time to construct and occupy.

Vagaries of weather, like rain, will have little effect. There is also no need to keep pouring water on the outside during the drying process, otherwise known as curing. The foundation filler can be anything from crushed stones to sand and cement or simply concrete slabs.

There are, however, many challenges that could hinder such houses from becoming widespread to the extent of replacing the current brick and mortar types.

Peter Kinyanjui, an architect, says that machine-making bricks are expensive to acquire and brick-makers cannot be found all around the country.

Transportation costs will also have a bearing on the overall construction costs. Though materials like sand and cement would be greatly halved in usage, one would still need them during interior plastering process. This casting acts as a binding method for the laid-up bricks.

Kinyanjui thinks we may one day go the ancient Egyptian way in brick making where sand and straw will be seen as vital. He sees the exploitation of red earth, or any slow draining soil for that matter, as likely commercial venture in the long-run in case quarrying is exhausted.

Alternatively, individuals in rural setting can bake mud bricks, dry them in the sun and build houses with sticky clay being used as mortar.

Kinyanjui says this is cost-effective compared to purchasing materials. The building can be strengthened inside and outside with a screed of plastering for added strength and durability, which gives the house a permanent outlook.

Does he believe we have exhausted all the options for building a house? No. The ever-changing technological innovations will see future houses being made in record time with or without use of brick and mortar.

He envisions a future where metal structures are put on site with heavy, factory produced slabs and walls being fitted with these structures. Like timber houses that were common in early days having been phased out, he says, even the current trend, too, could be on its way out.

“One day, we may see ready-made factory houses resembling shipping containers being purchased by individuals and hauled to a housing site,” he says.

Such movable or manufactured homes come with wheels and can be attached to a truck to be hauled where the homeowner wants them.

Such a house can come with several units like a kitchen, bedrooms, and store or have more of extensions added at the site. They can be sold fully equipped like in developed countries or the owners can equip them as per budgetary expectations. Such homes can be rested on blocks or concrete slabs or placed on a paved ground.

“Once installed on site, these homes can be connected with water and electricity or even sewer services,” he says, adding that maintenance costs would be low compared to modern houses.

And as land becomes scarce, putting pressure on housing, Richard Nyakundi believes we may see some people bordering water bodies going the Orient way. He, however, doesn’t believe we have exhausted all the housing options and blames financial constraints for denying many the opportunity to own their own homes.

According to him, the real estate market is in the hands of well-financed few, consigning many to being tenants who live in houses they can hardly put up on their own.

Currently, he says, there is no housing crisis in the country and the boom in the construction industry may be a pointer to better economic growth.

He decries what he describes as “the seemingly exclusiveness in the real estate sector” as many developers only have rich and middle-class income earners in mind when putting up housing units.

The values they are likely to actualise in renting, leasing out or selling seems to inform on this. Majority of the working poor puts up in low residential houses and in places where waste disposal and sewerage services and security is poor.

On what he terms as oriental model, Nyakundi sees the inland waterways forming part of prime “land” in future. Houseboats may not be common or unheard of locally, but they have been in existence for hundreds of years in the orient. Known as junks or sampans, they are still common in China and are made close to banks of navigable rivers or water bodies.

“Think of the Mooring Restaurant in the coast to get the picture of what I am talking about. The possibility of making floating houses or live in boats cannot be overlooked if land matters come to this,” he says. Such models in today’s economy could be costly, he reckons. They can be made of materials like wood, steel, fiberglass, aluminum or the combination of wood covered with fiberglass or aluminum and steel.

They can be designed to remain in water all-year-round or be permanently anchored. Some can have sail or engine for power and may be fitted with electric generators to provide lightings in the compartments.

But Nyakundi has a word of caution: Only the rich can afford such types of houses. When the majority associate yachting with the rich, even such models like floating houses or living in boats will be associated with the rich the way Mooring Restaurant is viewed as a tourist resort.

More, the National Environment Management Authority) may be hard pressed to issue permits to such home dwellers given our history of poor waste disposal where even beach hotels pour in raw sewage into the sea.

And unless the country thinks of coming up with cheap, affordable housing for all, the current brick and mortar will remain the trend for the long haul.

What homes Africa’s super rich spend their billions on

By James Wanzala | 13 days ago