Orphans of Mudavadi, Wetangula pact with Ruto in Western region

For over three years after Deputy President William Ruto started his quest for presidency, four men were the face of his campaigns.

Former Kakamega Senator Boni Khalwale, Mumias East MP Benjamin Washiali, Sirisia MP John Waluke and Kimilili MP Didmus Barasa were either always attending Ruto’s rallies or would be holding other meetings to popularise him ahead of the General Election.

And their biggest role was to deliver the Western Kenya vote to Ruto and his United Democratic Alliance (UDA), which is now working with Musalia Mudavadi’s ANC and Moses Wetang’ula’s Ford Kenya, among other parties, under the Kenya Kwanza coalition.

During that time, the four sought to portray themselves as Ruto’s gallant foot soldiers and they went to all lengths to prove it as they sought to woo voters from Western Kenya, a region where Ruto’s main rival, Raila Odinga of ODM, now campaigning under Azimio La Umoja movement, has enjoyed support over the years.

At the rallies, the four men were vocal, hitting out at Ruto’s opponents in bare-knuckle tackles as they worked relentlessly to market Ruto and UDA.

During the by-elections in Matungu and Kibra constituencies, they fought tooth and nail to advance the political agenda of the DP.

In the Kibra by-election in 2019, Khalwale appeared willing to put everything on the line as he was captured pelting perceived ODM supporters with stones. Then, Ruto was backing former footballer McDonald Mariga in a poll to replace former area MP Ken Okoth who had died.

The battle was between Ruto and Raila. Okoth was an ODM legislator and Raila was keen to recapture the seat. In the end, the seat was won by ODM’s Imran Okoth, a brother of the former MP.

Today, Kwalwale, Barasa, Weluke, and Washiali are nowhere to be seen in Ruto’s campaigns.

On the other hand, save for Washiali who has announced he will not defend his seat, the other three are said to be busy campaigning for themselves. Khalwale has declared interest in the Kakamega governor seat while the rest hope to defend their parliamentary seats.

They rarely attend Ruto’s rallies outside the Western region and their prominence during rallies in the region appears to have waned as Mudavadi and Wetang’ula appear to have taken their places.

However, the three MPs and the former senator have said their absence from some of the DP’s rallies is strategic.

“Obviously, Mudavadi and Wetang’ula have a lot of support in the region compared to Khalwale, Barasa, Weluke, and Washiali. It was clear from the start that the four would be casualties of the entry of the two party leaders in the DP camp,” said an ANC official who did not wish to be named.

Khalwale has however termed their absence from Ruto’s rallies a tactical retreat.

“We have been missing in action in Kenya Kwanza campaigns. However, this is not meant to sabotage the DP. It does not also mean we have been pushed away or we are angry at the arrival of Mudavadi and Wetang’ula. Far from it,” said the former senator who is eyeing the UDA ticket.

He said the entry of Mudavadi and Wetang’ula has emboldened their resolve to win the election by expanding and cementing the DPs support base.

For Kwalwale, however, the UDA-ANC union has complicated his bid to succeed Wycliffe Oparanya as governor. He is now in the same camp with area Senator Cleophas Malalah of ANC who has also declared interest for the same seat.

Washiali said they have been engaging in grassroots mobilisation and their efforts are paying off.

“Our alliance enjoys massive support across the country. Kenya Kwanza commands huge support compared to Jubilee in 2013 and 2017 General Election,” he said.

At the weekend, Barasa downplayed an alleged plan by DAP-K, which is allied to Azimio, to sponsor a candidate against him, exuding confidence he will defend his seat. 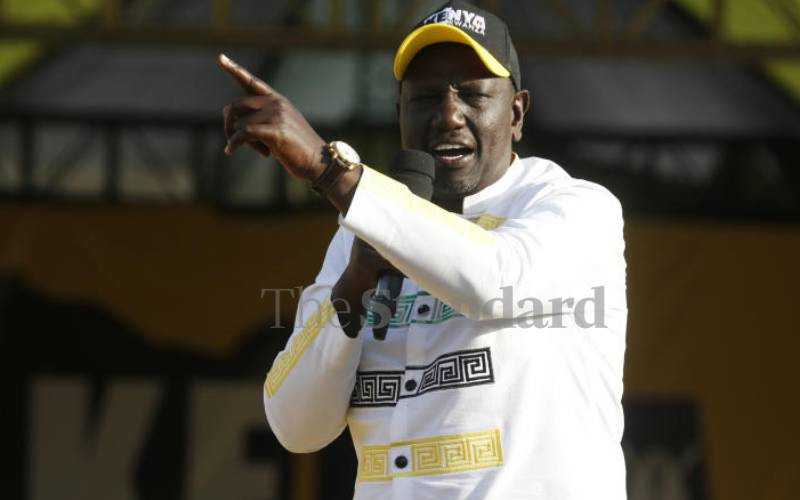