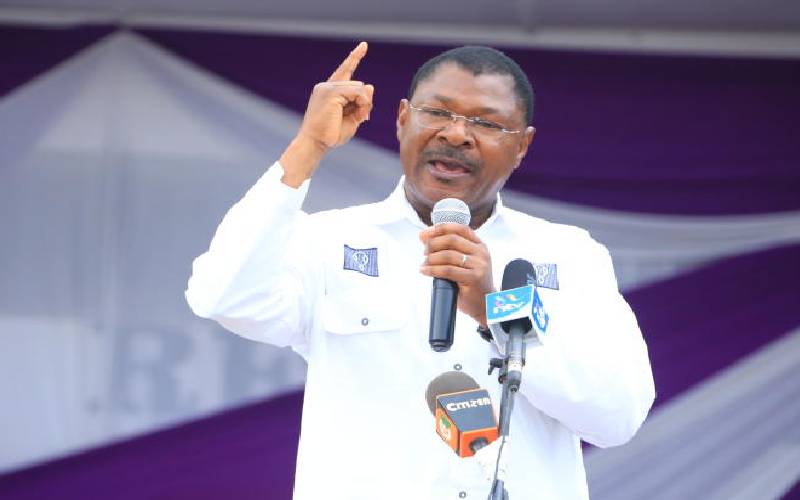 Confusion has rocked Ford Kenya party after ousted Party Leader Moses Wetangula insisted he was still the bonafide party boss and instead suspended those behind his removal.

Just minutes after his ouster, Wetangula called a media briefing at the party headquarters to condemn what he described as a coup in the Lion party.

Wetangula (pictured) said the real Ford Kenya NEC has suspended all the members who took part in the unlawful meeting to overthrow the party leadership.

Eseli who is the party secretary general has been replaced Kimili MP Chris Wamalwa while Wamunyinyi has also been removed from his party posts.

Also replaced was Ford Kenya of Women League and Nominated Busia MCA Cynthia Mutere and her position given to her nominated colleague Roslidah Andambi from Kakamega.

Wetangula accused the Wangamati faction of airlifting imposters from across the country into a five-Star hotel in the city before forcing them to execute unlawful changes in the party.

“It is so sad that a group calling themselves NEC assembled in some five Star hotel and airlifted fake party members from as far as Kisumu and Mombasa to come and carry out an illegality,” said Wtangula.

He said some the imposters were detained at Radisson Blue Hotel in Nairobi before being forced to make unlawful changes.

The Bungoma Senator urged members of Ford Kenya not to panic because the truants and errant members have been disciplined by the party’s NEC.

“We want to tell our members not to panic because there is no coup in the party. Coups are for cowards who don’t believe in the rule of law.”

He said under his leadership, the party has grown from having just a single MP to 13 MPs, two governors, one senator and 85 MCAs.

“We have 13 members of parliament two governors, a senator and 85 MCAs under my leadership,” he added.

Wetangula urged those who are interested in the party’s positions including the party leader position to prepare themselves and wait until the day the delegate conference will be convened to elect officials.

We have done elections from the grassroots and we tell them to file their papers and let meet at Bomas when the delegates will assemble. I am sure I will be given a second chance.

He hailed his deputy and Kitutu Chache South MP Richard Onyonka for declining to be part of the coup despite being approached by the plotters.

“I want to salute for Omoima Onyonka for declining to be part of this trickery.  He was my assistant as Foreign Affairs minister and I trained him properly,” he concluded.

The Wangamati faction removed Wetangula as a party after the NEC accused him of gross misconduct and failing to champion unity in the party.

By Timothy Kariuki Oct. 05, 2022
Politics
Ngirici: Why I have withdrawn election petition against Governor Waiguru
.